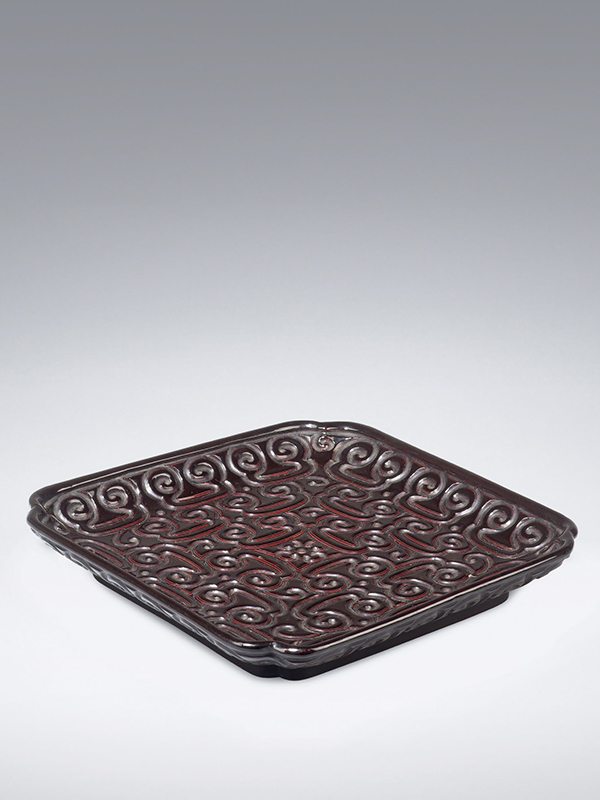 A square lacquer dish, supported on a high foot with upturned sides and indented corners. The interior is carved in the tixi technique with three rows of heart shape scrolls resembling faces in four rows, centred on a quatrefoil design in the middle.  The decoration is carved though a thick layer of black lacquer, which is interspersed with one or two thin layers of vermilion lacquer.  The design is deliberately cut at an angle to make the red layers more visible. Both the interior and the exterior are highly polished. The base of the dish is plain and lacquered black. The dish is contained within a Japanese wooden box.

This exquisitely carved lacquer dish represents a rare example of Chinese tixi lacquer with its heart-shape carved design. Although the pattern is seen on Jizhou ceramics and metal wares of the Song and Yuan periods, carved lacquer wares with this heart-shaped pattern dated to the Song dynasty are very rare and only a handful are known to exist, mostly in Japanese collections. Although the heart-shape pattern was inspired by earlier pieces, the gently rising scrolls and U-shaped troughs of this lacquer dish are different compared to the straight tixi carving style of the Song dynasty and therefore this dish is attributed to the Yuan or early Ming dynasty.  The fact that the dish was for a long time in a Japanese collection proves the popularity of Chinese tixi lacquer in Japan and at the same time explains the near pristine condition of this dish. A comparable square black lacquer dish with three rows of pommel scrolls centred on a quatrefoil symbol and with slightly rounded corners, dated to the early Ming dynasty, early 15th century, is in the Muwen Tang Collection.1