Pottery figure of a foreign dancer 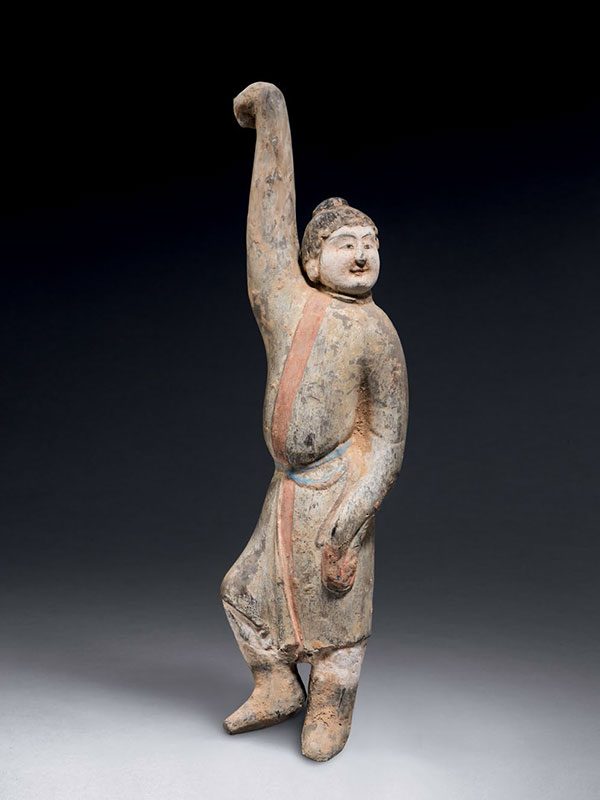 A pottery model of a male dancer of foreign appearance, standing tall and turning his head towards his left. The slightly portly figure reaches his right arm towards the sky, whilst he holds his left arm loosely pendent alongside his body. His right knee is bent and forms an angle with his left foot. The figure is dressed in a long-sleeved, three-quarter length layered robe, with a high circular collar up to the neck and over-length long sleeves covering his hands. The robe is loosely draped above the top of his pointed black boots. His arched eyebrows, eyes and prominent nose, red lips and stylised black hairs are depicted in fine detail. The pigments of his robe with red trim and blue lace are well preserved.

This masterly modelled pottery figure represents the rhythmical movements of a Turkic dancer. The popularity of foreign performance, including dance and music, became a trendy lifestyle during the Northern Dynasties and the Tang dynasty. Male and female dancers came to China from the Central Asian oasis-cities, as well as from India, from Indonesian archipelagos, and from the islands of the South Seas. A scene of foreign dance is depicted in a Tang poem by Liu Yanshi: “Leaping body spinning like a wheel- jade belt chiming; Playful feet- a riot of colour in supple brocade shoes; People stand all around- silent and wide-eyed; Flutes and lutes- tilting head and pointing feet.” [1] A lead-glazed pottery foreign dancer in a closely comparable dancing posture and with similar facial features and hairstyle, dated to the Northern Dynasties or the Tang dynasty (550-650 AD), is in the Royal Ontario Museum, Toronto (fig. 1). [2] It has been catalogued as a Khorezmian (Turkic) dancer, originating as a nomadic north Iranian tribe from the Siberian Steppes. The closely comparable characteristics of the current figure to the one in the Royal Ontario Museum suggests its possible ethnic origin. A painted pottery figure depicted as an elderly foreigner wearing a boat-shaped hat and a long-sleeved robe, was excavated in 1972 from the Northern Qi tomb of Shedi Huiluo at Shouyang County and dated to 562 AD and is now in the collection of the Shanxi Museum. [3] A further number of comparable Tang pottery dancers, whose various dresses and postures denote they belong to different ethnic groups, are respectively in the collection of the Victoria and Albert Museum [4] and in the Meiyintang collection. [5]