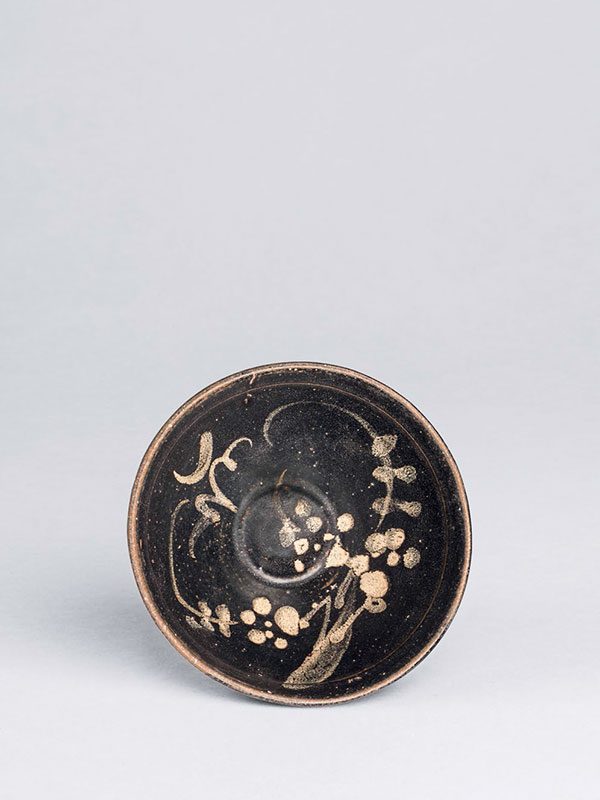 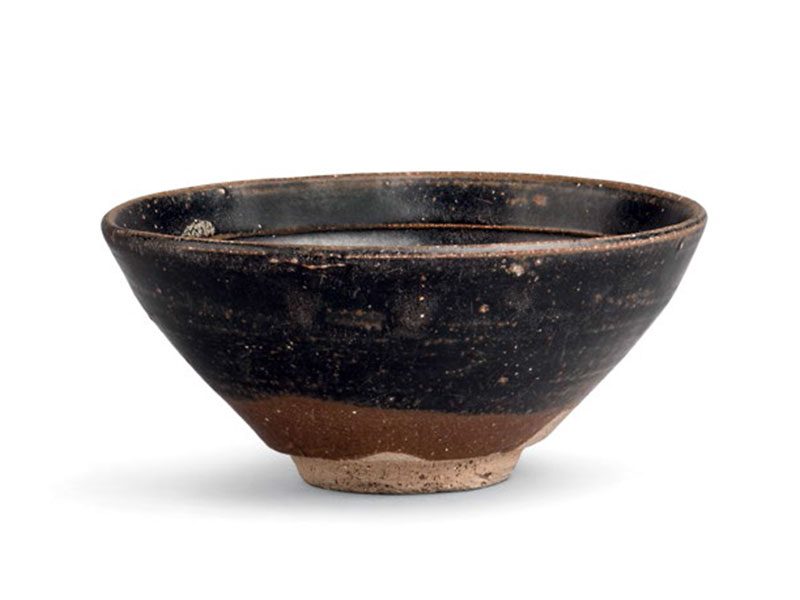 A stoneware tea bowl of jizhou type, the conical sides rising from a short foot and gently extending upwards at the lip. The interior and exterior of the bowl are covered in layers of dark brown glaze, ending in an irregular edge above the foot. The interior is painted in fluid, buff brushstrokes with branches of plum blossom and a crescent moon above clouds. The unglazed foot reveals the buff clay body.

The jizhou kiln in Jiangxi province produced small, sturdily potted bowls usually with a dark brown or black glaze, which were used for drinking tea. This bowl was first coated with a layer of caramel-coloured slip glaze; its irregular lower edge suggesting that the piece was dipped twice. Following a period of drying, the dark brown glaze was probably applied in two partial immersions. The decoration was then painted with a mixture of wood or bamboo ash and slip. Potters at the jizhou kilns might have created the moon-and-plum (yue-mei in Chinese) design on their own, drawing inspiration from poetry and painting of the day. The Chinese literati considered the plum blossoms at their most appealing when illuminated by moonlight on a cold winter’s night, clearly the aesthetic vision that inspired the pairing of moon and plum on this bowl. Three closely comparable jizhou bowls with a similar glaze and with moon-and-plum decoration, slightly larger in size and dated to the Southern Song to Yuan dynasty, are respectively in the collections of the Arthur M. Sackler Museum,[1] the Asian Art Museum of San Francisco, [2] and the Art Gallery of the Chinese University of Hong Kong. [3] Another jizhou bowl with a design of a plum branch, dated to the Southern Song dynasty, 12th or 13th century, is in the Shatzman collection at the Ackland Art Museum, the University of North Carolina at Chapel Hill. [4]