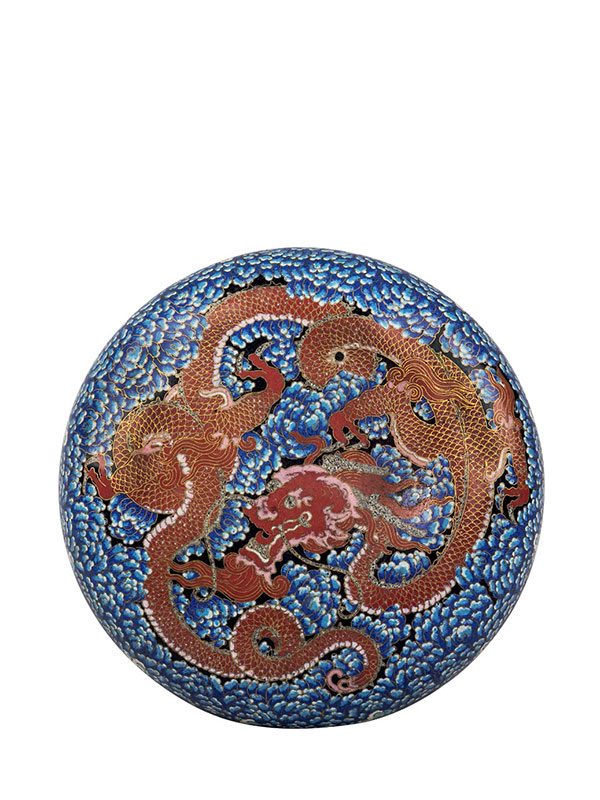 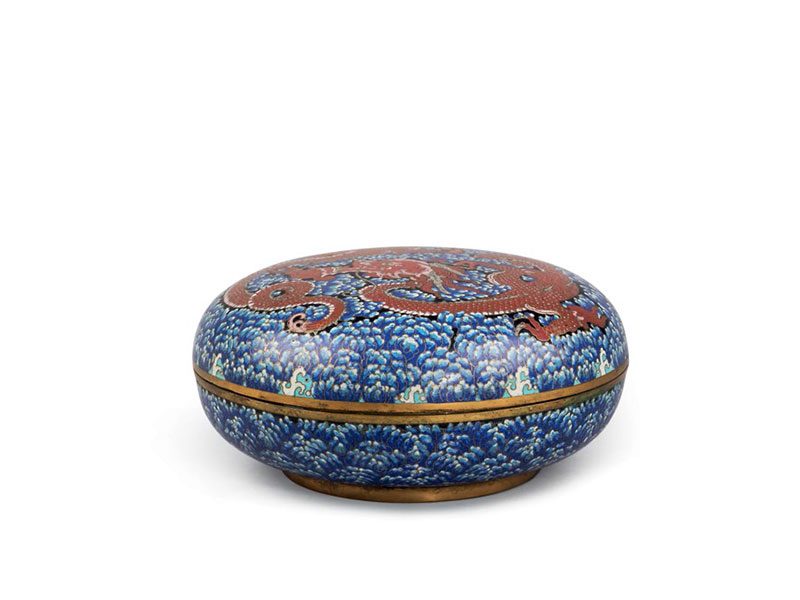 A large circular cloisonné enamel box with a domed cover and short straight foot. The cover is decorated in vivid cloisonné enamels with a vivacious two-clawed red dragon with a sinuous and scaly body, set against dense clusters of variegated blue clouds resembling flowering blooms. The edge of the cover is adorned with crashing waves encircling the rim. The sides of the box are decorated with similar blue clouds and crashing waves. The interior and the rims are covered in a thick layer of gilding.

This impressive cloisonné enamel box is remarkable not only for its monumental size and outstanding quality of the enamelling technique, but also for its very rare colour scheme. The lively overall composition and the admirable shading accomplished in the reds as well as the blues were clearly inspired by a painted porcelain prototype. This colour scheme, well-known from underglaze copper-red and cobalt-blue decoration on Jingdezhen porcelains, is extremely rare for a piece of cloisonné enamel. A very similar porcelain design existed in the Yongzheng period (1723 – 35), for example a tianqiuping (globular vase) inscribed with the imperial Yongzheng reign mark painted with a copper-red three-clawed dragon emerging from blue clouds. [1] There are only few known cloisonné enamel tianqiuping with a comparable red dragon amidst blue clouds colour scheme. Two were sold in Hong Kong recently: one decorated with a three-clawed dragon and dated to the Yongzheng period, [2] one with a two-clawed dragon formerly in the collection of the late Kenneth Malcolm and dated to the early 18th century (fig. 1). [3] Another example, dated to the mid-Qing dynasty, formerly in the Qing Court collection, is now in the Palace Museum, Beijing. [4]