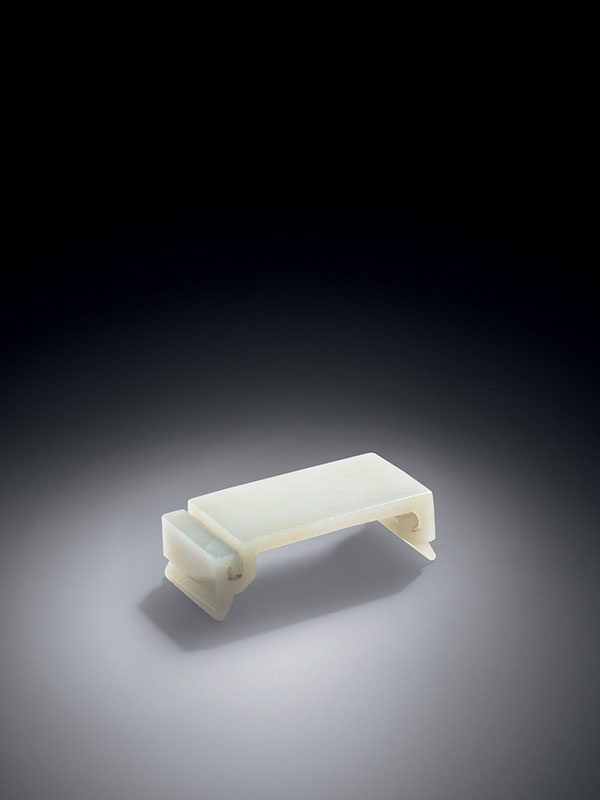 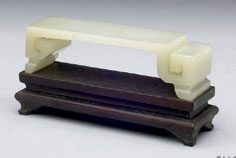 A small white jade ink stick rest of rectangular shape with flat surface and scroll ends. The two scroll ends are in turn supported by two splayed feet. The jade is well polished and is predominantly of whitish-green colour with a yellowish hue.

This ink stick rest, fashioned from a whole piece of white jade, would have been a delicate stationery utensil on the scholar’s desk. Ink stick rests (also known as ink rests) are commonly found in scholar’s studio, favoured by those who have attained the highest levels of literati taste. The scroll shape of this ink rest is inspired by Ming furniture, as the fashion of re-inventing antique pieces for the scholar’s desk was very popular during the Qing dynasty. Two closely comparable white jade ink stick rests similar in size and with scroll-ends, dated to the Qing dynasty and formerly in the Qing Court Collection, are now in the collection of the National Palace Museum, Taipei (fig. 1).[1]

Provenance: the collection of Richard Drew