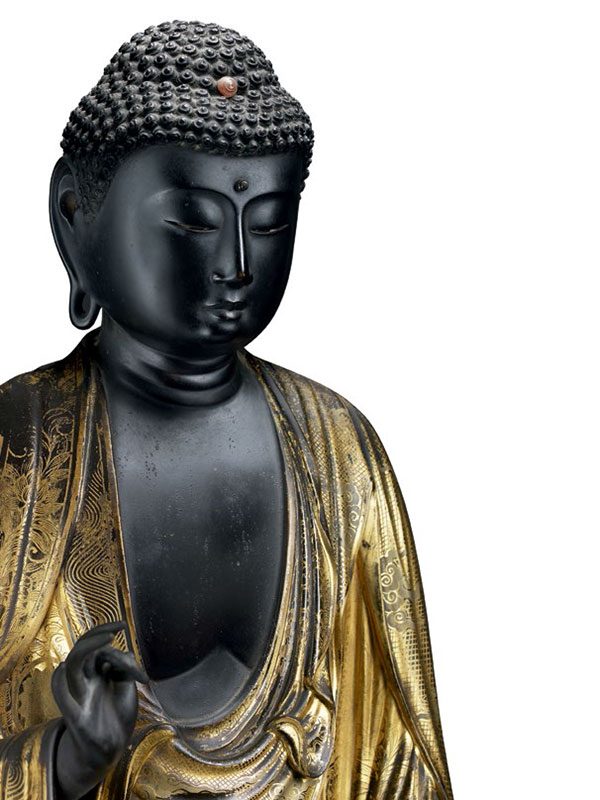 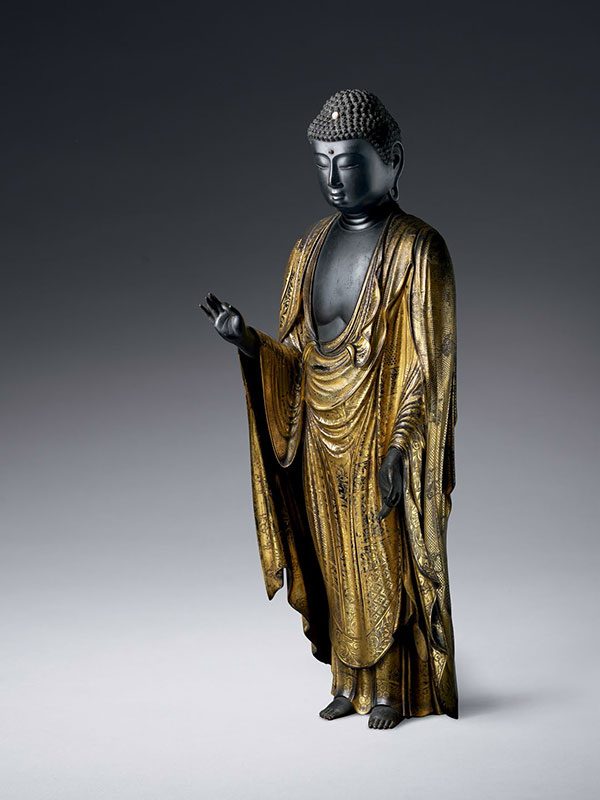 A large wood figure of the Buddha, depicted standing, dressed in elaborately folded, patterned robes, which cover the shoulders, fall open at the chest and leave the feet exposed. The face has a serene expression and symmetrical features, a sensuous mouth and a long, straight nose. The hooded eyelids almost cover the inset painted eyes and are surmounted by arched eyebrows. The ears have long pendulous lobes, the ends of which are pierced. A small semi-precious stone on the forehead between the eyebrows indicates the third eye of spiritual vision. The head is covered in tightly coiffed curls, and is crowned by a prominent cranial protuberance, the front of which contains a small, pink-coloured stone. The Buddha’s right hand is raised whilst the left hand is extended forwards, palm upwards. The index fingers and thumbs on both hands are joined and together these hand gestures indicate raigo mudra (the mudra of welcome). The Buddha itself is covered in black lacquer. His robes display different motifs, including starburst diapers, floral, cloud and wave patterns, and are covered in a thin layer of bright gilding, exposing the black lacquer underneath in places.

Stylistically, this serene, large wood figure of the Buddha carries on the tradition of Japanese wood sculpture from earlier eras, such as the Kamakura period (1185-1333), typical features of which are simple folded clothing and a serene expression. Indeed these characteristics continued to define sculpture of later periods, making it difficult to precisely date this serenely beautiful sculpture, which might well date from the late Muromachi period, 16th century, but equally possibly from the early Edo period, 17th century. A standing wood Buddha with exactly the same mudra and with comparable features is in the Avery Brundage Collection at the Asian Art Museum of San Francisco, where it is dated to the Muromachi period, 16th century.1 A similar example of a standing wood sculpture of Amida Nyorai dated to the Edo period 17th – 18th century is in the Langen collection. [2]