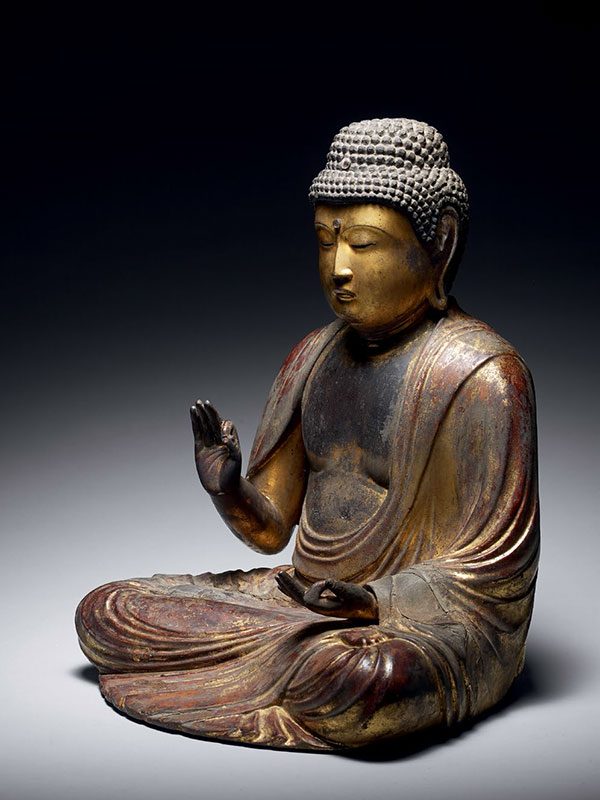 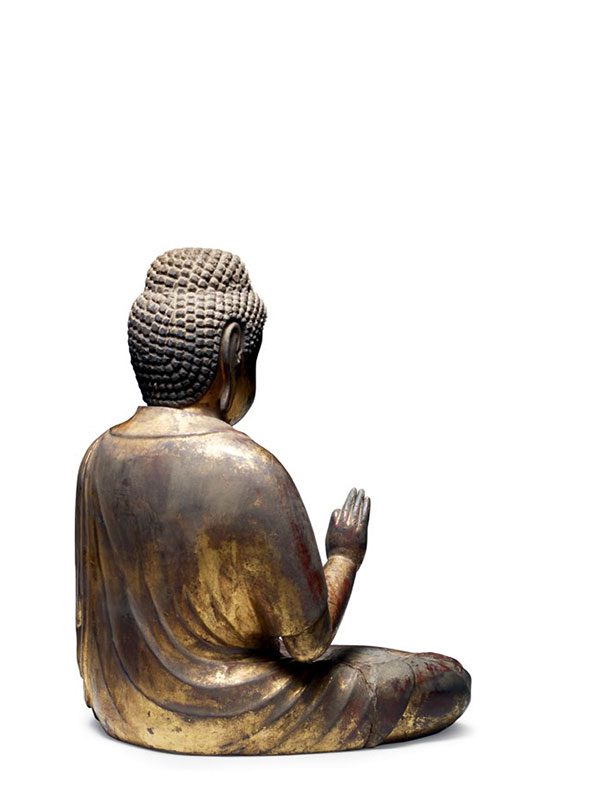 A large lacquered wood figure of the Buddha, seated with his legs folded, the soles of the feet partly showing. His body is draped in elaborately folded robes, which fall open at the chest. The Buddha’s right hand is raised whilst the left hand is extended forwards, palm upwards. The index fingers and thumbs on both hands are joined and together these hand gestures indicate raigo mudra (the mudra of welcome). The Buddha’s face has a serene expression and symmetrical features with hooded eyelids over narrow eyes and arched eyebrows. The pendulous earlobes are pierced. On the forehead between the eyebrows the third eye of spiritual vision is visible. The head, which is covered in tightly coiffed curls, is crowned by a prominent cranial protuberance, the front of which is inset with another circular decoration. The figure is covered in a thin layer of matt lacquer with the original gilding visible in most areas.

Stylistically, this serene, skilfully carved wood figure of the Buddha carries on the tradition of Japanese wood sculpture from earlier eras, such as the Kamakura period, typical features of which are simple, folded clothing and a serene expression. The use of both the third eye of spiritual vision and the cranial bump are also seen in the earlier periods. Japan saw a gradual decline in Buddhism in the late Muromachi period, which carried on during the subsequent Momoyama and Edo periods, and resulted in a parallel decline in Buddhist sculpture. The present image of the Buddha is proof that the tradition of Buddhist sculpture was not lost entirely. It is similar in style and execution to a much larger seated sculpture of Amida Nyorai dated to the Fujiwara period, late 12th century, in the Minneapolis Institute of Arts. [1] It is also similar in style to an image of Shaka Nyorai dated to the Kamakura period, in the Todai-Ji (Great Eastern Temple) in Nara. [2] A comparable standing figure of Amida Nyorai on a lotus plinth and dated to the Muromachi period, 16th century, is in the Brundage collection at the Asian Art Museum of San Francisco. [3]