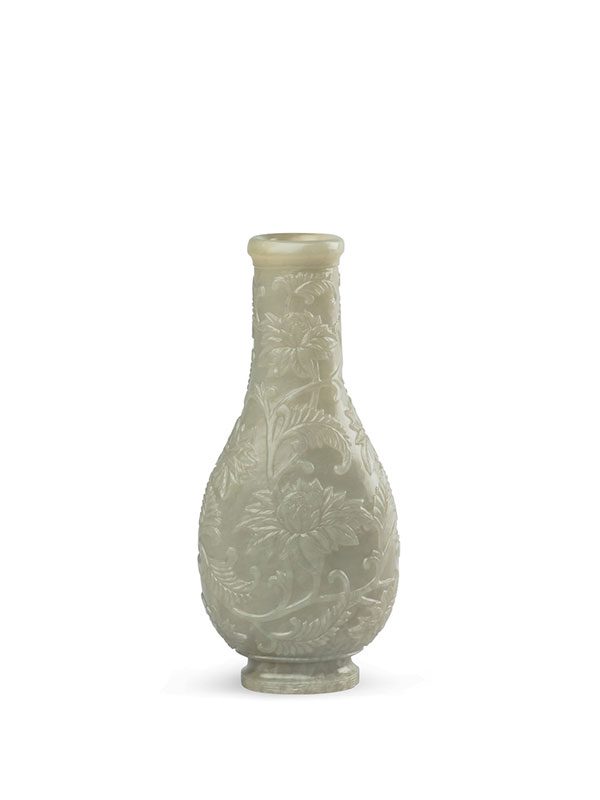 A jade vase of baluster form, the body of oval outline and supported on a short splayed foot, narrowing down at the shoulder and terminating in a lipped rim. The body is carved in relief with a design of intricate flowering lotus, curling leaves and entwined tendrils. The jade is of greyish green colour and has some white specks.

Mughal and Mughal-style jades were one of the great passions of the Qianlong Emperor and during his long reign he was an ardent patron and collector, building up an unrivalled collection of antique and contemporary works in this much revered material. Qianlong greatly admired archaic Chinese jades, but the contemporary jades for which he reserved his greatest praise were not in traditional Chinese style, but those he termed ‘Hindustan’ jades. The Qianlong emperor was so entranced by these ‘Mughal’ jades that he commissioned lapidaries working for the Chinese court to make jade items in Mughal style. An interesting aspect of this jade vase is the presence of the western-style lotus (xifanlian) and its leafy pattern. Chinese craftsmen adapted their skills to reflect a change in their carved designs from the early Qing dynasty.[1] Two spinach-green nephrite vases dated to the Qianlong period (1736 – 1795), closely comparable in the western-style lotus carving on the body, are respectively in the collection of the Palace Museum, Beijing[2] and the Alan and Simone Hartman collection.[3]