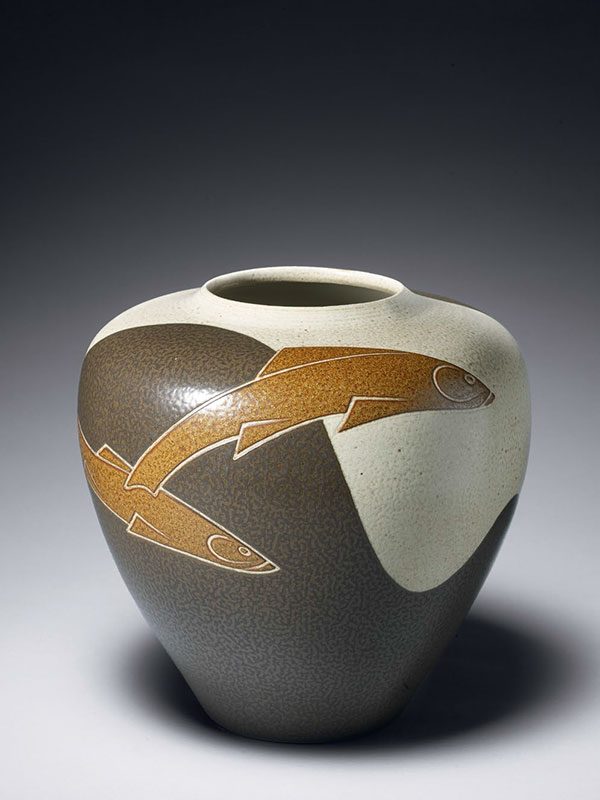 A porcelain vase of rounded form, the sides rising from a small, slightly recessed circular base and tapering upwards to the broad shoulder, which is surmounted by a small mouth with lipped rim. The exterior is partly engraved or inlaid with a decoration of vigorous fish, glazed in light brown tones on a ground of black and white Yin Yang pattern. The recessed base is inscribed ‘Ken’, the signature of Miyanohara Ken. Contained within the original tomobako, inscribed Moriage sogyo-mon tsubo, Fuchiku gama (A pair of fish in relief design, vase, Fuchiku kiln). Stamped Ken with the seal Fu (of Fuchiku).

Miyanohara Ken (1898 – 1977) was born in Kagoshima City and first wanted to become an architect, studying that profession at Waseda University, beginning in 1916. Around 1924, he studied painting with Yamanouchi Takayuki at the Kawabata Painting Studio. He started studying ceramics in 1923 under Miyagawa Kozan II and Itaya Hazan, and in 1925 built his first kiln in the garden of his home in Tokyo. In 1927 he participated in the formation of the art association Totokai (Eastern Ceramic Association). In 1929 he exhibited at the 10th Teiten, winning an award for the first time. He continued to exhibit regularly at the Teiten and Bunten exhibitions. Miyanohara invented new and distinctive techniques for ornamenting ceramics, building up glaze on the surface, inlaying one glaze into another and sculpting an applied glaze away from the body to reveal a design. A very similar vase by Miyanohara Ken, dated to 1958, with a waisted neck and decorated with a design of engraved fishes was included in the retrospective catalogue published in 2005 by the Chiba Prefectural Museum of Modern Art. [1]