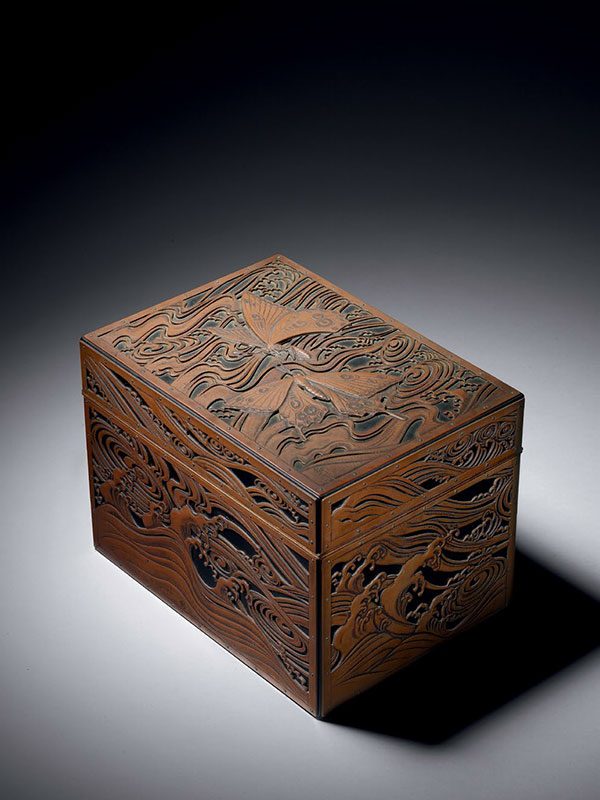 A wood covered box, entirely overlaid in brass panels, the top of the lid with a decoration of butterflies hovering over wildly crested waves, pierced and engraved in detail, the side panels showing waves only. All the brass panels are attached to the box by nails at regular intervals. The bottom left-hand corner top panel is engraved with the two-character signature of Osuga Takashi.

Osuga Takashi (1901-1987) was born in Takamatsu City, Kagawa prefecture. He studied metal art at the Tokyo University of Fine Art, after graduating from the metal art department at his local high school, Kagawa Prefectural Takamatsu Industrial High School in Kagawa prefecture, Shikoku Island. In 1925 he graduated from the Tokyo Fine Arts School and was a founding member of Kojinsha, an association that aimed to completely modernise the metal working arts. Osuga Takashi began exhibiting at the Teiten in 1929, and later at the Shin-Bunten and Nitten. He became councillor at the Nitten, and won the highest accolade from the Japan Art Academy (Nihon geijutsuin sho) in 1958. He was one of the most prominent modernists working in metal from the 1930s through the 1970s. Osuga Takashi loved insects and many of his works have an insect motif, as does this box. His works can be found at the National Museum of Modern Art, Tokyo [1] and also at the National Museum of Modern Art, Kyoto. [2]