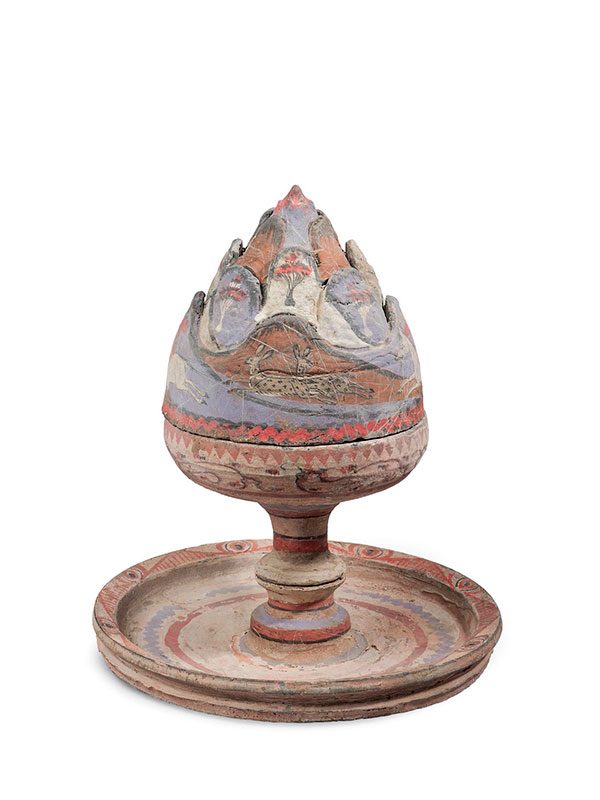 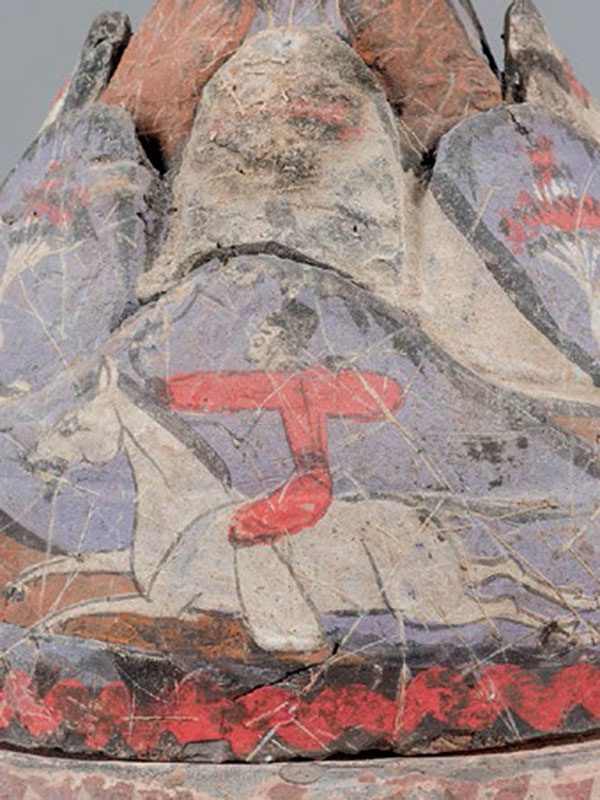 A grey pottery incense burner, the cup-shaped basin supported on a knobbed, hollow stem, which itself rests on a dish with everted rim. The conical openwork cover is modelled as a range of overlapping mountain peaks, interspersed with a number of small cavities. The incense burner is covered in a layer of thin white slip and painted in great detail with purple, red, black and orange pigments. The cover depicts two hunters on horseback, chasing at full stretch a wild boar and two deer, one of which turns its head around to glance back at the hunter. Each mountain peak is painted with a single tree. The basin and dish-shaped stand are decorated with bands of formal and geometric pattern.

The boshanlu, meaning ‘mountain censer’, was popular during the Western Han dynasty as a representation of the idyllic, mountainous realm of the Immortals, but does not seem to have existed prior to that period.[1] Han dynasty pottery shapes usually have parallels in metal; a particularly sumptuous prototype for this pottery incense burner, inlaid in gold, is in the Hebei Provincial Museum.[2] Examples of similar shape in both glazed and unglazed pottery are relatively common, but this boshanlu is extremely unusual for its well-retained, vividly bright colour painting scheme and the life-like depiction of a hunt. An unglazed boshanlu moulded with hunting scenes in high relief, dated to the Han dynasty, is in the Julius Eberhardt collection in Vienna.[3] Two green-glazed examples with comparable hunting scenes, dated later to the Eastern Han dynasty, 1st or 2nd century AD, are in the Meiyintang collection.[4] A Western Han brick relief depicting hunting scenes in mountains, similarly including hunters on horseback chasing boars and deer, was unearthed at Luoyang, Henan province.[5] A large Western Han pottery jar painted with a mounted archer chasing a tiger is in the Meiyintang collection.[6]