Shibuichi sculpture of a hare leaping over the moon 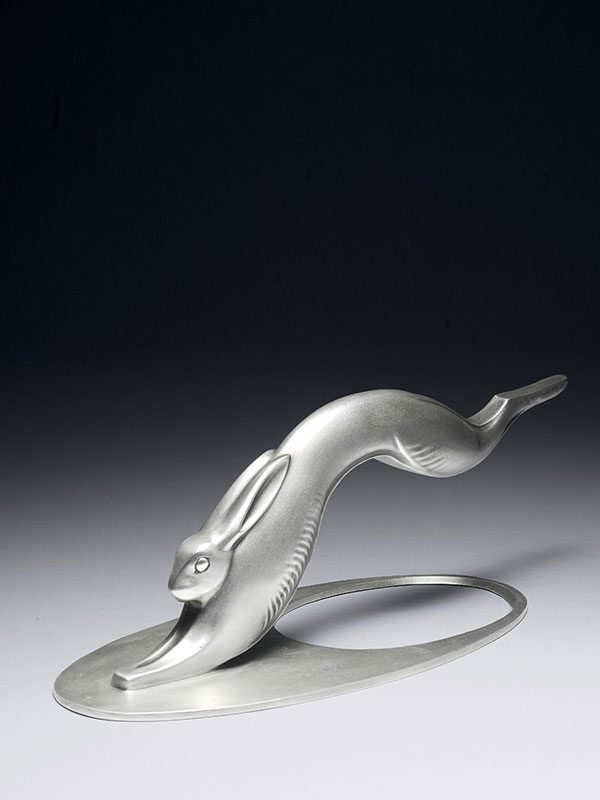 A shibuichi sculpture of a hare leaping over the moon. The animal has very long ears that rest on its arched back, its hind legs are stretched out behind him and details such as eyes, nose and whiskers are well defined. The base of the sculpture is formed by the moon, depicted here as a flat disc with a large aperture at the back. The surface of the hare is delicately rendered as fur and coloured a rich silver tone. Signed on the base with the signature of the artist Hyakusei (also pronounced Momoyo). The hare is preserved in its original tomobako or wooden box, the top inscribed Tsukiakari (Moonlight) and the back Hyakusei, with the seal Hyakusei.

The “moon rabbit“ in folklore is a rabbit that lives on the moon, based on the idea that identifies the markings of the moon as a rabbit. The folklore originated in China, and then spread to other Asian cultures. Shibuichi is also called rogin by the Japanese, meaning ‘alloy metal that emits faint moonlight’. It is aptly named, as the material is an alloy of copper and silver. The artist Yamamuro Hyakusei (1900-1990) had the given name Gensaku. After graduating from the Takaoka Design High School (Takaoka Kogei Gakko) in Toyama Prefecture, he worked for the Hattori Tokei-ten (Seiko) and became a managing director at the Wako, both prestigious jewellery and gift-ware retailers. In 1958, he received an award from the Japan Art Academy. In 1961, he retired from running the business and concentrated on metal crafting activities and being a regular exhibitor at the Nitten Exhibitions. He was judge at the Nitten Exhibition Committee. He received an award from the prestigious Japan Art Academy [Nihon Geijutsuin] for his works exhibited at the 12th and 13th Nitten exhibitions (1957 and 1958).