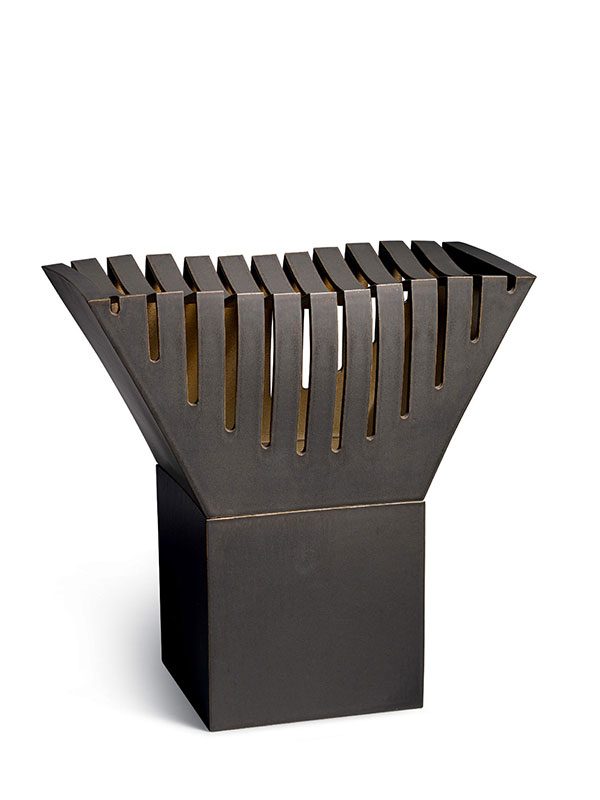 A ceramic sculpture, the widely splayed top incised with regular, parallel openwork lines. The sculpture is glazed a dark brown colour to imitate bronze. The base is impressed with the mark M Kiyomizu.

The potter of this very interesting sculpture, Kiyomizu Masahiro, has effectively succeeded in making it look like bronze. The potter was born 1954 as the son of the sculptor and future 7th head of the Kiyomizu family Kyu¯bei (at that time known as Hiroshi).) Kiyomizu Masahiro became Kiyomizu Rokubei VIII in 2000. He received a number of awards including the grand prize at the Asahi ceramics exhibition in 1983 and 1986. A technique he favours is joining together flat slabs of clay in extended forms, highlighting instead of hiding the process of their construction. He then makes cuts to weaken the structure, which results in distortions during firing. He has received numerous awards, including the Grand Prize at the Asahi Ceramics Exhibition. His work is held in the collections of the British Museum, the National Art Museum of China, the National Museum of Modern Art in Tokyo, the National Museum of Art in Osaka and the Kyoto Municipal Museum of Art, among others.