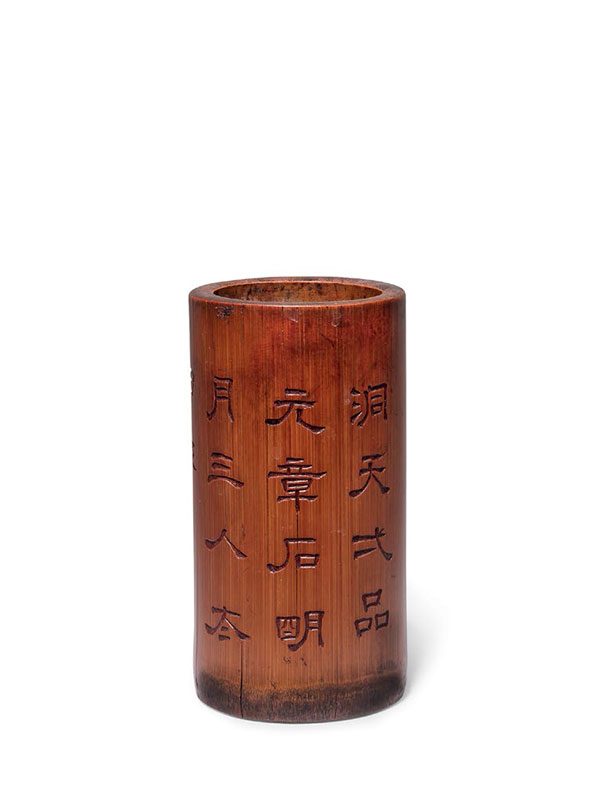 A cylindrical brush pot carved from a section of bamboo, supported on a short, concave base. The side is incised with an inscription of 16 Chinese characters in seal script, including 14 large and two small characters. The larger characters consist of two lines of a 7-character poem. The two smaller characters are the name of Bo Dong, assumed to be the calligrapher or carver of this piece. The bamboo has acquired a dark amber colour patina.

Bamboo brush pots were popular scholar’s objects during the Ming and Qing dynasties. Materials such as bamboo, wood, gourd, various soft stones and other easily worked materials were often carved or decorated by literati, particularly in later times when seal carving became fashionable and large numbers of scholars became familiar with the ‘iron brush’ (the carving tools used by literati in transferring their brush work aesthetic to other media).1  The inscription carved on the brush pot can be translated as follows “The best quality of the Yuan Zhang stones, together with the Tai Bai cups under the moonlight.” The first sentence refers to Taihu stones, a type of porous stone that came from the Dongting Mountains in Suzhou, close to Lake Tai. They were also known as ‘Yuan Zhang stones’, since a Song-dynasty calligrapher Mi Fu (1051 – 1107), with the style name ‘Yuan Zhang’, was well-known for favouring Taihu stones. The second sentence refers to a Tang-dynasty poem written by Li Bai (701 – 762), with style name ‘Tai Bai’, describing drinking wine under the moonlight. These two sentences were widely carved on bamboo or pottery objects. Examples of bamboo brush pots carved with inscriptions or poems are in the collections of the National Palace Museum, Taipei,2 and the Shanghai Museum.3