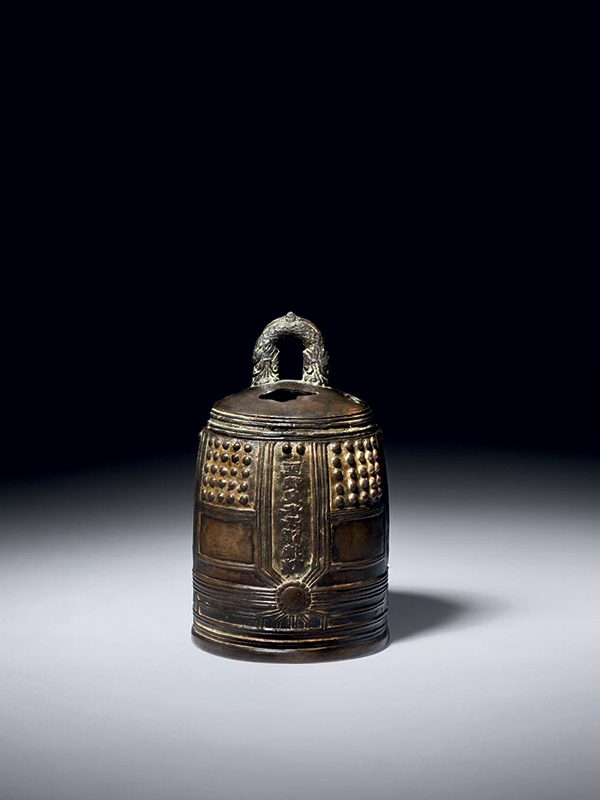 A bronze incense burner in the shape of a temple bell, with a flat base, the sides tapered toward the domed lid, which has a looped finial in the form of a makara. The body is optically divided into sections, the upper  part is adorned with a band of raised bosses. The lower part of the body is cast with two flowers on either side that are connected by linear bands. The lid is pierced with four apertures of cloud shape. One long panel on the side is cast with an eight­-character inscription.

This incense burner is shaped as a miniature of the Shitennō ­ji Temple Bell and may have been produced as a memento for worshippers who visited the temple. Although the original bell no longer exists, it has been recorded in printed materials, notably a postcard dated to 1908 (see Fig. 1). The eight­character inscription reads: Shōtoku kō taishi (Prince Shōtoku) Shoutoku Shou (bell of praising the virtues). Prince Shōtoku (572 -­ 622) was a legendary figure in the history of Japan for his support and introduction of Buddhism to Japan. He established the Shitennō ­ji temple in Osaka in 593, the first Buddhist and oldest officially administered temple in Japan. In 1902, the newly cast 114-­ton Shitennō ­ji Temple Bell was hung and was considered the heaviest functioning bell in the world from that year until 1942, when it was melted down for its metal to assist with the then ongoing World War II effort.[1]