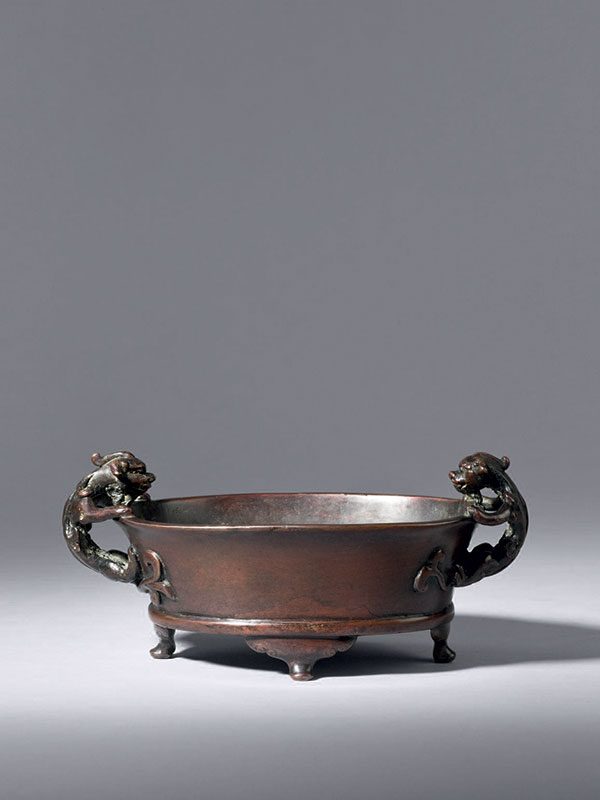 A bronze censer cast in the form of an oval-shaped basin with a flat base, supported on four curved bracket feet. The sides gradually curve outwards towards the flared rim. Two sturdy loop-handles, each in the form of a chi dragon, are applied to the sides. The chi dragons face each other with well-defined eyes, pricked ears and a single horn. Their four feet are spread out powerfully with their front paws sturdily gripping the edge of the basin. Their elongated bodies are gracefully arched with their bifurcated tails extended in either direction. The four shaped feet are decorated with stylised cloud scrolls in the form of ruyi-heads. The recessed base is engraved with a vertically written, six-character reign mark of the emperor Xuande.

This censer takes the form of a vessel type known in China as a ‘narcissus basin (shuixian pen)’; a name typically referring to its flat-based basin with concave spreading sides. This form first appeared in Chinese ceramics during the Northern Song dynasty (960 – 1127), and four Ru-ware narcissus basins in the collection of the National Palace Museum, Taipei are the most refined examples.[1] The simplicity of this vessel form was picked up during the early Ming dynasty and used in the production of bronze censers. A closely comparable bronze censer of similar size and form, and also with chi-dragon handles, bearing a six-character Xuande mark, is dated to the 17th century and is in the Robert E. Kresko collection at the Saint Louis Art Museum.[2] Another similar example is in the collection of Steven Hung & Lindy Chern.[3]