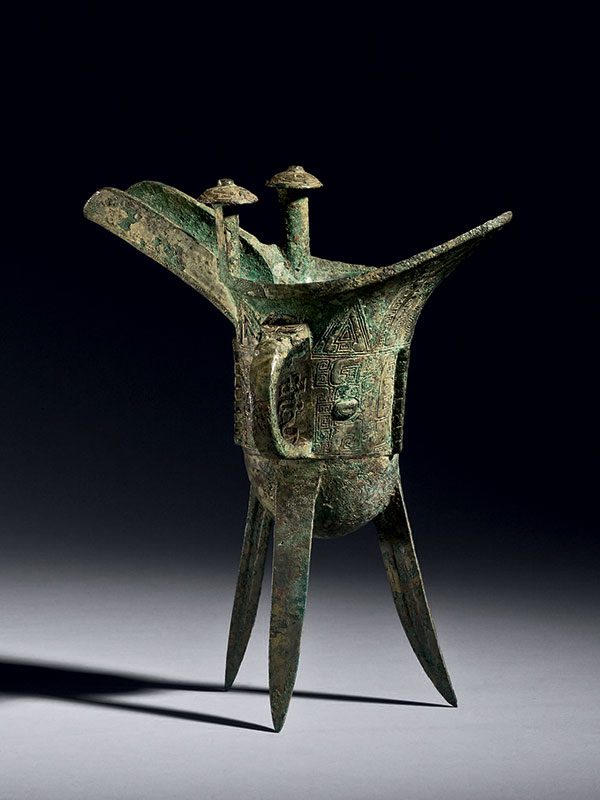 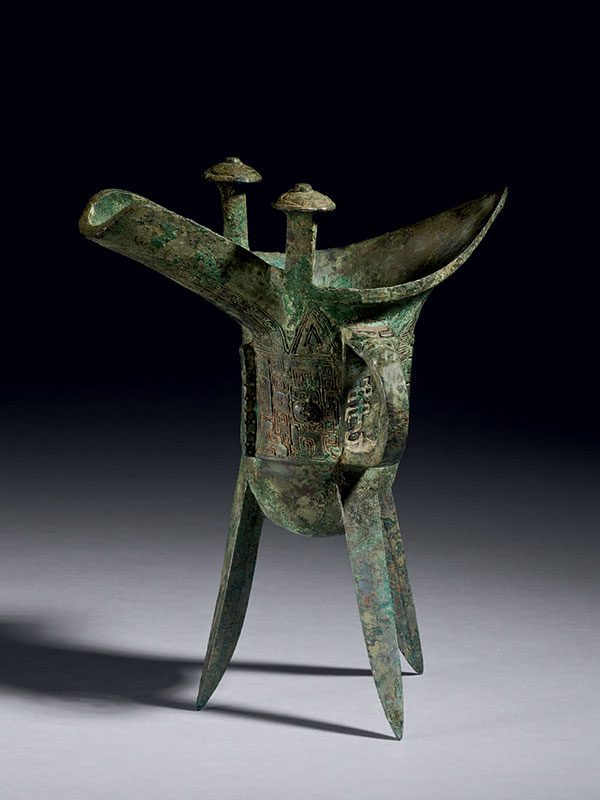 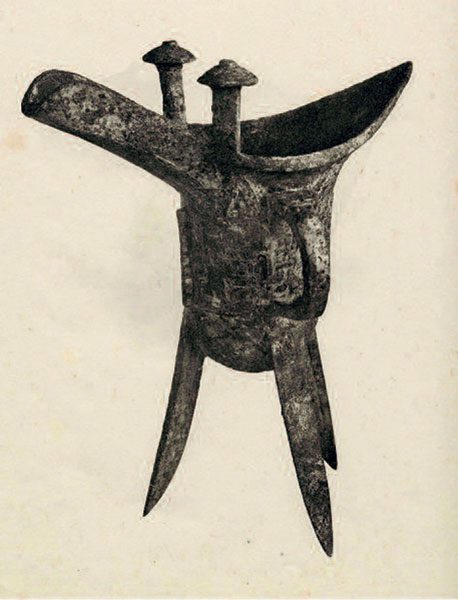 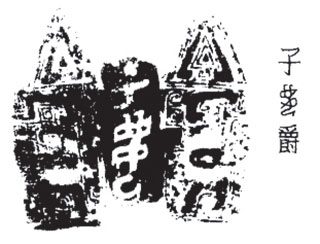 A bronze libation vessel of jue form, the deep U.shaped body supported on three slender, slightly splayed legs that end in sharp points and that have grooves running on either side. The vessel has a long curved spout; opposite it the rim rises into a pointed flange. At the base of the spout are two semi.circular posts, capped by mushroom.shaped finials. A C.shaped handle is attached to one side and is embellished with a finely detailed bovine mask with prominent horns and ears. A single, broad band of intaglio ornament encircles the vessel. It consists of a complex pattern incorporating bold taotie masks with bulging eyes. Three raised vertical flanges interrupt the frieze, dividing it into sections. The ornament extends upwards to a row of triangular forms and also underneath the spout of the vessel. The finials are decorated with swirling ornament. A two.character inscription, zi mei, is cast underneath the handle of the vessel. The vessel is mostly covered in a mellow green patina, leaving some areas uncovered and showing the original colour of the material.

One of the most classical and recognisable shapes in archaic bronzes, the jue tripod libation cup was often paired with the gu beaker. Although it is generally assumed that the jue tripod derives its shape from Neolithic pottery, a theory has also been put forward that its shape was inspired by an ox horn to which two legs had been added to support it.[1] Jue were used in rituals to serve warm wine and other liquids. These rituals were carried out in a prescribed manner, with the number, type and size of the vessels determined by the importance of the participants and the occasion.[2] The present jue is remarkable for its quality of casting and its beautiful patina. The two.character inscription, zi mei, reveals its original owner’s name. Zi Mei was once thought to be the wife of a prince who lived in the mid.Shang dynasty,[3] but she has recently been identified as one of the two daughters of Wu Ding (1250 – 1192 BC), the 23rd king of the Shang dynasty.[4] She might have served in the Shang court as an officer and had her own fief.[5] There are only a few known bronze vessels with the zi mei inscription dated to the late Shang dynasty, and all are believed to have been unearthed from Anyang city, Henan province. This leads us to believe that the current example originates from the same place as well. Among the bronzes with the zi mei inscription, there are only eight libation vessels jue, and seven of them are of very similar style of decoration and pattern.[6] Comparing the ink rubbings of the images and inscriptions of these seven jue, it turns out that a particular piece, recorded as no. 8080, is nearly identical in shape, inscription, and even the pattern of the patina. This leads us to believe that this is the same piece as the present one. Bronze jue no. 8080 (figs. 1 & 2) has a clearly traceable provenance, including its last known owner, Rong Hou (also known as Jung Hou, 1874 .?), a Minister of Finance of the Northeastern provinces during the early period of the Republic of China, and the first president of the Central Bank of the Manchukuo (State of Manchuria, 1932 .1945).[7] Rong Hou was a well-known collector of early Chinese bronzes, and 169 pieces of his bronze collection were researched by the Japanese archaeologist Umehara Sueji (1893 .1983) and published in four volumes of catalogues, known as Guan jia lou ji jin tu (Images of bronzes in Guanjialou) in 1947 – including the no. 8080 bronze jue which is listed as no. 23 in the second volume. Some of the bronzes in the Rong Hou collection are preserved in museums, such as a comparable jue (no. 8079) now in the collection of the Shanghai Museum.[8] However, most of his collection found its way later into the open market, therefore the records in Guan jia lou ji jin tu have become the most reliable references for those bronzes. 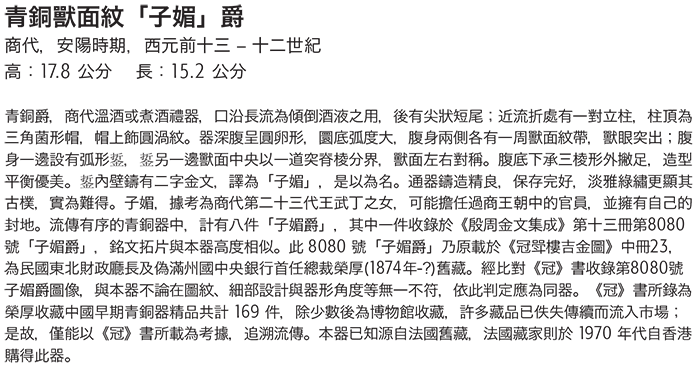