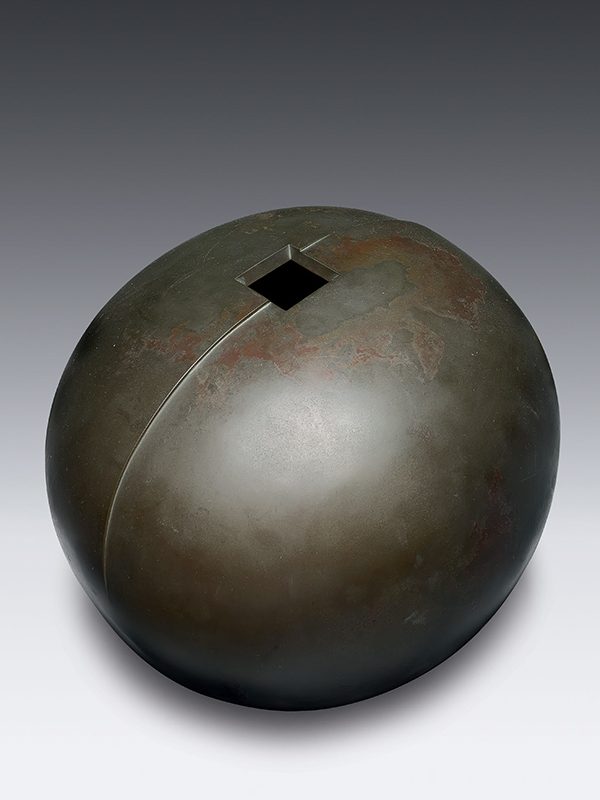 A large, egg-shaped bronze vase, the two ovoid halves joined in the middle with a prominent seam. The vase has a square aperture at the top. The base is signed with the artist’s name Hideo.

Eto Hideo was born in Tokyo in 1936. He studied metal art from 1952 at the Tokyo University of Fine Art under Professor Maruyama Fubo (1890-1970), In 1961, Eto Hideo entered the Tokyo University of Fine Arts and graduated with an MA degree in 1967. From 1969, he worked as an assistant lecturer at Fukuoka University of Education and retired as professor in 2000.  Hideo exhibited widely at the Nitten exhibitions, from 1966 onwards.  In 1967 he won a prize at the Nihon Gendai Kogei Bijutsuka Kyokai (Japan Contemporary Art and Crafts Artists Association). In 1979, he became a member of the Nihon Shin Kogei-ten (the Japan New Art Crafts Exhibition), where he exhibited and was awarded. His works can be found at the Fukuoka Prefecture Museum of Art. In 2009, the Kyushu Sangyo University, Fukuoka prefecture, held an exhibition to celebrate his retirement.