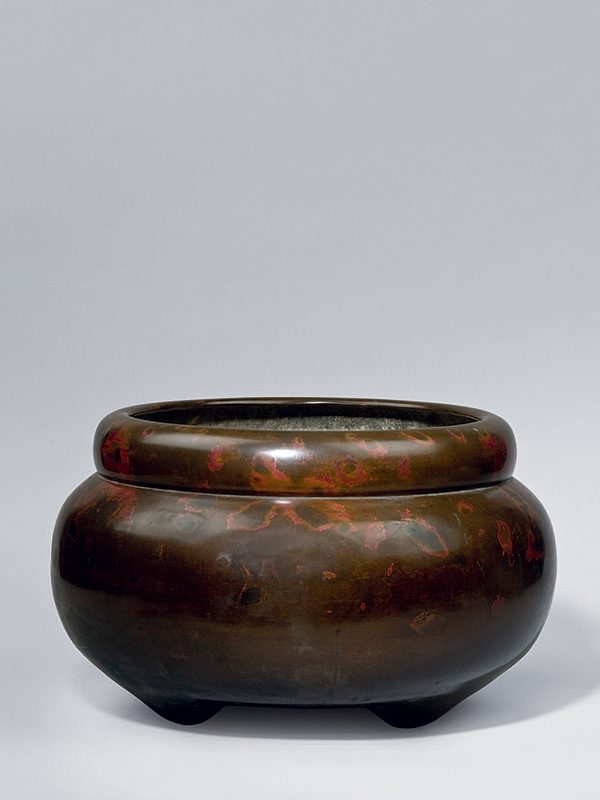 A large solid cast bronze hibachi. The body of wide, globular form, which at the top tapers inwards and continues into a bulbous ring. The hibachi is supported on three feet, which form an integral part of the main body. The hibachi has a warm reddish­-brown patina with rich natural flame­-like patterns in a variety of tones. The inside shows signs of wear and has a residue of fine ash. With the original tomobako, inscribed on the outside: Karakane hibachi, on­-kamashi, Nishimura Dōya (‘Chinese bronze’ hibachi brazier, a tea-­utensil metal-­maker, Nishimura Dōya). The inside of the tomobako is also inscribed: Tenpo Kanoe-­u jugatsu kichijutsu, Shingetsusai Ihaku konomi with kao monogramme, Fuku no kami Dai­-ro (An auspicious day in the 10th month of Tempo 14 (1843), a style favoured by Shingetsusai Ihaku, a large brazier entitled the God of Luck or the Gods of Wind and Fire).

A hibachi, literally meaning ‘fire bowl’, is an open­-topped container that functions traditionally as a heating device in Japan and was designed to hold burning charcoal. According to the inscription on the tomobako this striking cast bronze hibachi was made by Nishimura Dōya, who was active circa 1678-­1730, the third generation of the family that founded the Nishimura Foundry, Kyoto. The inscription on the tomobako dates from much later; 1843. ‘Shingetsusai Ihaku’ may refer to a tea ceremony practitioner in Kyoto. The Nishimura family had been engaged in producing tea-­ceremony metal kettles for generations; the first generation  Nishimura Donin (active during the late Muromachi – Momoyama periods, c. 1560­-1610) reputedly made a tea­-kettle for the warlord Oda Nobunaga. Nishimura Donin is also reputed to have produced teakettles for the prominent tea master Takeno Joo (1502-­1555). Apart from teakettles, the successive generations of Nishimura foundry masters, based at the Sanjo Kaman­za district, Kyoto made Buddhist gongs, lanterns and both functional and ornamental items. The word ‘fuku’ written on the tomobako has two meanings: the ‘God of Luck’, and ‘Gods of Wind and Fire’.