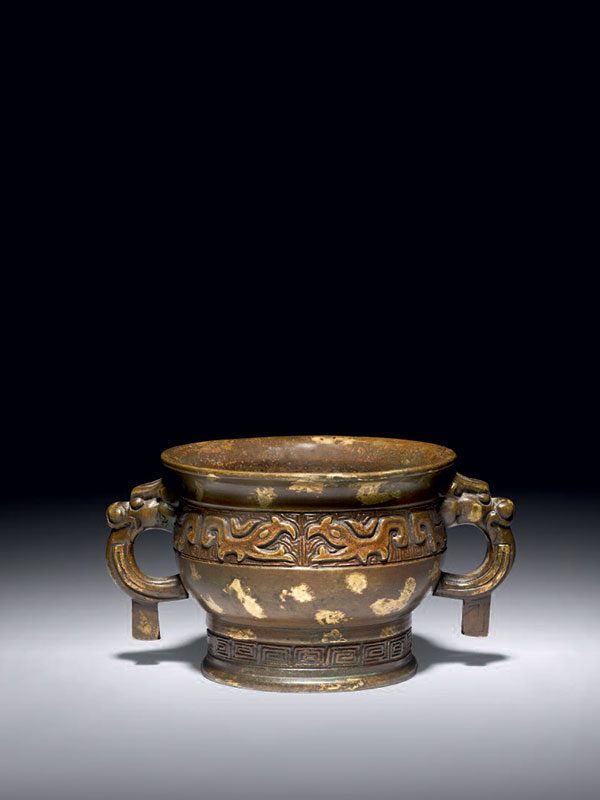 A small bronze incense burner in the form of an archaic gui vessel, supported on a high, straight foot. The rounded sides curve inwards toward the rim, and flare out again at the lip. Two sturdy loop handles emanating from dragonheads and terminating in pendant tabs are fixed to the sides of the burner. The upper section of the body is cast with a frieze in low relief, featuring eight kui-dragons, centred on either side by a raised ridge. The foot is adorned with a band of continuous key-fret pattern. The exterior of the incense burner is covered overall with irregular gold splashes. The recessed base is engraved with a six-character reign mark of the emperor Xuande within a rectangular panel.

The shape of this bronze incense burner copies a late Shang or early Zhou bronze vessel, gui. The origins of the gold-splash decoration on bronze is still obscure, and it seems likely that it was a direct result of archaism: gold-splashing on original archaic bronze vessels or even the appearance of gold splashes resulting from uneven patination was viewed by later connoisseurs as deliberate. Two Ming dynasty bronze incense burners of comparable size and with Xuande marks are in the collection of the National Palace Museum, Taipei: one has a comparable archaic gui-form, the other is covered in similar gold splashes.[1] Three other comparable examples of similar size and with Xuande marks are in the collection of Steven Hung and Lindy Chern: one is decorated with a parcel-gilt frieze; another has a gold-splashed decoration; and the third example has a similar key-fret pattern around the foot.[2]