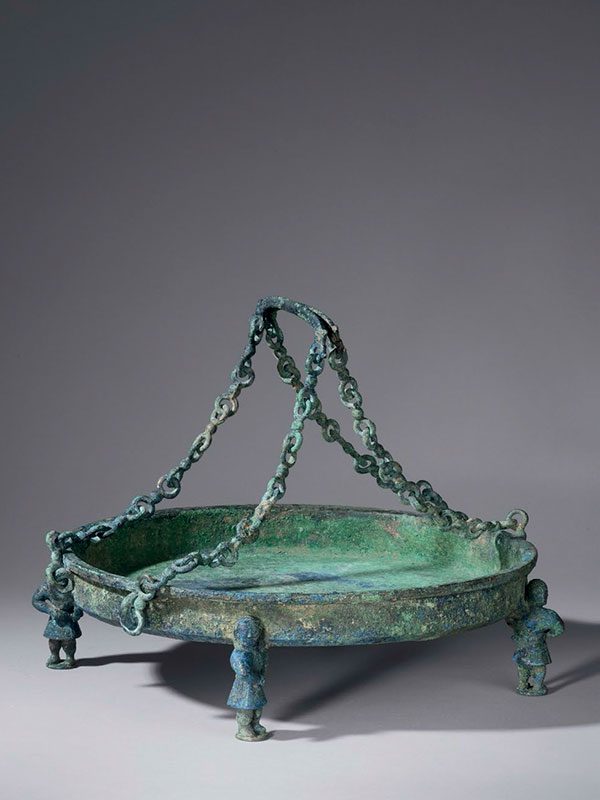 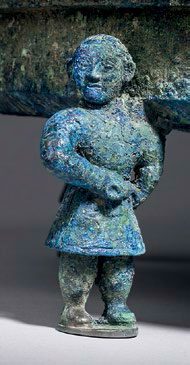 A circular bronze brazier, lu, the flat base supported on four feet, each in a form of a human figure. The body of the brazier is formed as a large shallow basin, with short, straight sides terminating in an everted rim.  The sides of the body are fully decorated in low-relief with densely packed meanders. Chain handles applied to each side of the vessel, each consisting of double-eyed links, are joined by a yoke-shaped handle with dragon mask finials. Each human figure forming the legs of the vessel is vividly cast, dressed in a long, belted robe and carrying the lower edge of the brazier on his left shoulder. The vessel has a brilliant blue and subtle grey-green patina overall.

This bronze brazier with chain handles (lu in Chinese) is one of the most exquisite examples of its type. Although the existence of a brazier lu in some other material, perhaps stone or brick, is implied as early as the Shang dynasty (16th century – c. 1046 BC) by the existence of bronze shovels (ji) for removing charcoal, it was only at the end of the Western Zhou and in the early Eastern Zhou period that the brazier itself began to be cast in bronze.1  By using the two chain handles the heater basin holding hot charcoal could be safely lifted and moved around.2 A closely comparable bronze brazier, slightly smaller in size, but of similar form with a circular basin supported by four slightly different human-figure feet and with two chain handles on each side, dated to the Eastern Zhou dynasty, is in the Lucy Maud Buckingham collection at the Art Institute of Chicago (fig. 1).3 Another closely comparable bronze brazier with two chain handles, slightly smaller and supported on three cabriole legs, was excavated from the tomb of the Zhongshan King of the Warring States period in 1976.4 The four very unusual feet in a form of a human figure, with their belted robe, a costume designed for an equestrian culture, are among the earliest Chinese representations of nomadic people on the northern frontier. A larger bronze figure of a charioteer wearing a similar costume, also dated to the Eastern Zhou dynasty, Warring States period, is in the collection of the Metropolitan Museum of Art.5