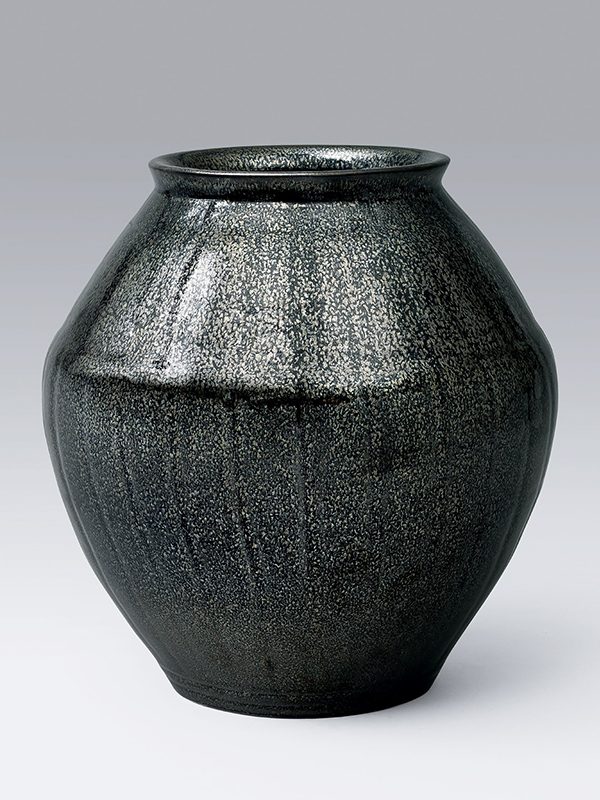 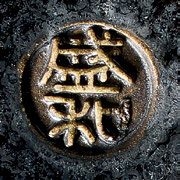 A large stoneware jar, the sides tapering outwards from a flat base. The jar tapers inwards from the centre and terminates in an everted rim and a wide mouth.  The jar has a tenmoku-type “oilspot” glaze that completely covers the outside and the inside rim. The jar retains the original wood box, tomobako, which is signed.

Tenmoku (also spelled “temmoku“) is a type of Japanese ceramic that originates in imitating Chinese Jian stonewares of the southern Song dynasty (960 – 1279).  Shapes are generally simple and bold, and the emphasis is on the glaze. Born in Kyoto in 1921, Morikazu Kimura took up the family tradition of potting from a very young age and spent much of his time researching and perfecting the tenmoku style.  In 1947, at the age of 26, he set up his own kiln in the exclusive potting district of Gojo-zaka and achieved much success. When Japanese potters began to copy the Chinese tenmoku style, two types became most prominent — “yohen” and “yuteki.” Yuteki or “oil spot” glazing, which Morikazu is best known for, is one of the most difficult glazing techniques in Japanese pottery and requires precision in the application of the glaze, in the firing conditions used, and in the cooling process employed. Morikazu’s works are held by the Kyoto National Museum of Modern Art and the Imperial Household. His work has been included in numerous exhibitions such as the Nitten, Nihon Dento Kogeiten (National Traditional Crafts Exhibition) and Nihon Togei Ten (National Ceramics Exhibition) among others. His work is also represented in a number of museum collections such as the British Museum, the Boston and Dallas museums, the National Gallery of Victoria, Melbourne, the Minneapolis Institute of Art and the Birmingham Museum of Art.