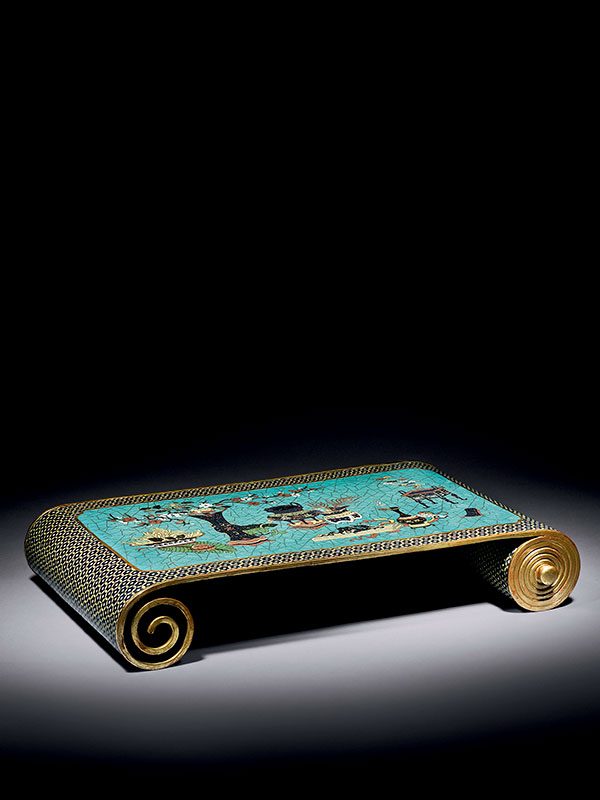 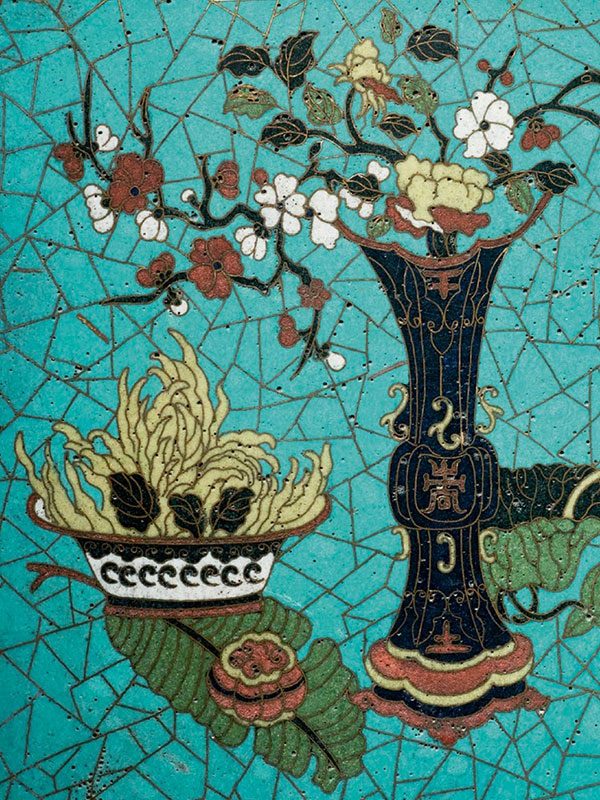 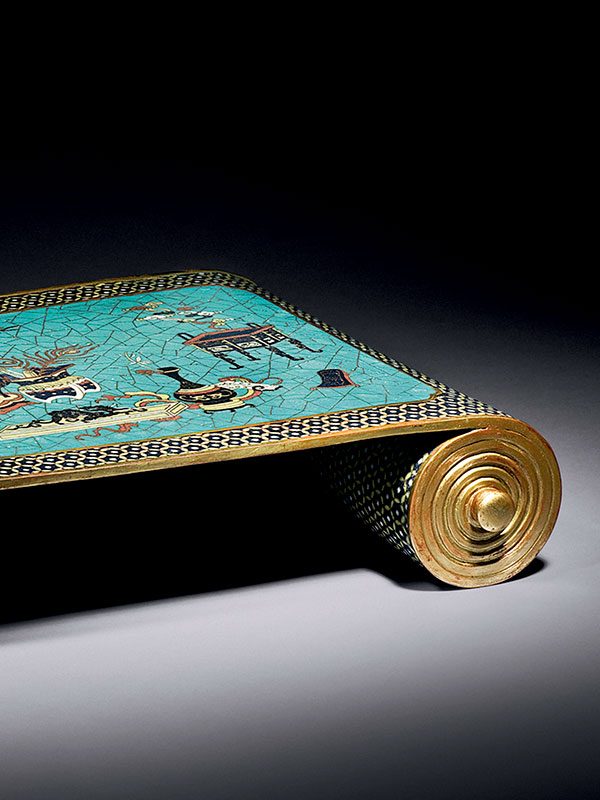 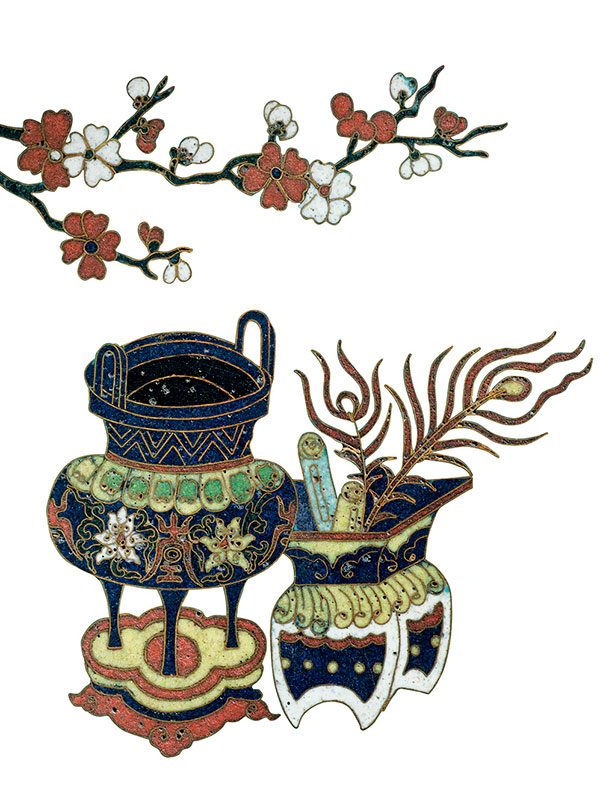 A cloisonné enamel armrest of rectangular shape with scrolled ends. The flat top is decorated with a group of scholar’s objects, including from left to right a bowl of finger citrons, a covered box with a swirling hibiscus pattern, an archaistic gu vase filled with branches of plum blossoms, a water container in the shape of a lotus leaf with a spoon, a round incense burner in the form of ding, a square brush pot, a paperweight with a dragon handle, a round flower vase, a beribboned stone chime, a rectangular incense burner in the form of fangding, from which smoke emerges, and an ink stone. All the antiquities are rendered in bright colours on a turquoise ground with a ‘cracked-ice’ pattern, and contained within a shaped cartouche. The edges and scrolled ends of the armrest have a coin pattern in yellow, purple and white colours. The underside of the armrest is adorned with six boldly depicted lotus blossoms in a continuous meander design. The rims and scrolled ends are in gilt bronze. 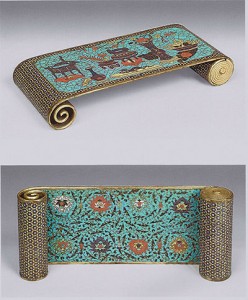 This exquisitely made and extraordinarily rare cloisonné enamel armrest has a strong scholarly context. Its shape resembles a partly opened hand scroll and the decoration of scholar’s objects adorning the top, also known as the ‘hundred antiquities’, highlights the comfortable lifestyle of the scholars and their leisurely pursuits.[1]  Fragrant finger citrons, also known as Buddha’s hand (foshou) due to their shape, were placed on the table to scent the studio and are also a pun for blessing (fu) and longevity (shou).[2] The L-shaped flat stone chime (qing) is an ancient Chinese percussion instrument, and stands as a pun for ‘to celebrate’ (qing) and ‘auspicious happiness’ (jiqing).[3] Some of the utensils in the form of archaic bronzes, such as the gu (wine vessel), the ding and the fang ding (sacrificial vessel), reflect the fondness for archaism among scholars in the early Qing dynasty. In the Kangxi period the motif of plum blossoms on a cracked-ice surface was introduced, signifying the beginning of spring and therefore the beginning of new life. The lotus decoration on the underside of the armrest, which also occurs in conjunction with fruit pods on Kangxi porcelain, supports its dating to the Kangxi period.[4] A closely related early Qing dynasty cloisonné enamel armrest, perhaps the pair to the present armrest, of comparable size, open-handscroll shape, with very similar lotus decoration on the underside and a mirrored arrangement of scholar’s objects in its decorative scheme, formerly in the Pierre Mercier collection (fig. 1), was exhibited in the Carrousel du Louvre, Paris in 2003 and at the Poly Art Museum, Beijing in 2011.[5] Another closely comparable cloisonné enamel armrest with raised sides, with an almost mirrored arrangement of scholar’s objects on the surface and a lotus decoration on the underside, dated to the Kangxi period (1662 – 1722), is in the collection of the Musée des Arts Décoratifs, Paris.[6]  There are two further comparable cloisonné enamel armrests of similar open-handscroll shape: one decorated with a scene of a famous play Xixiangji (The West Chamber) and with a similar lotus decoration underneath, dated to the second half of the 17th century, is in the Pierre Uldry collection;[7]  the other, with a medallion floral design and a slightly simplified shape, dated to the mid-Qing dynasty, is in the collection of the Palace Museum, Beijing.[8]