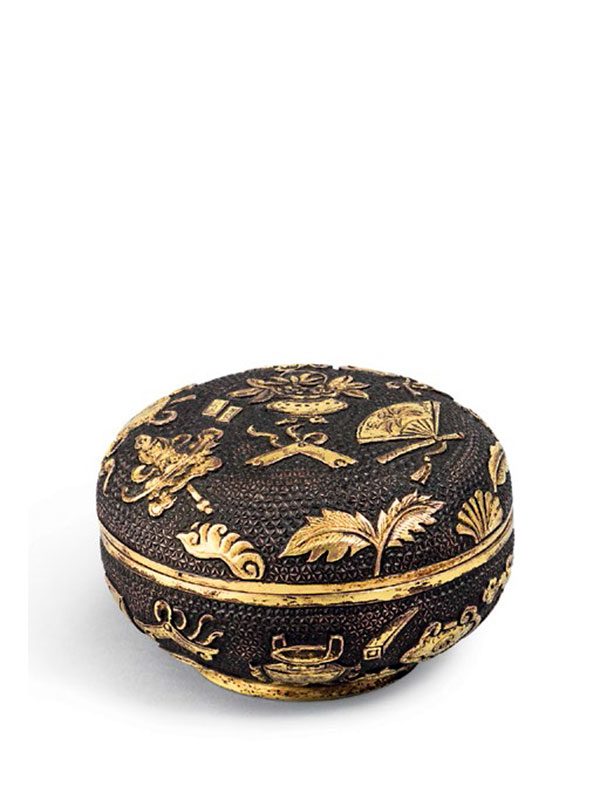 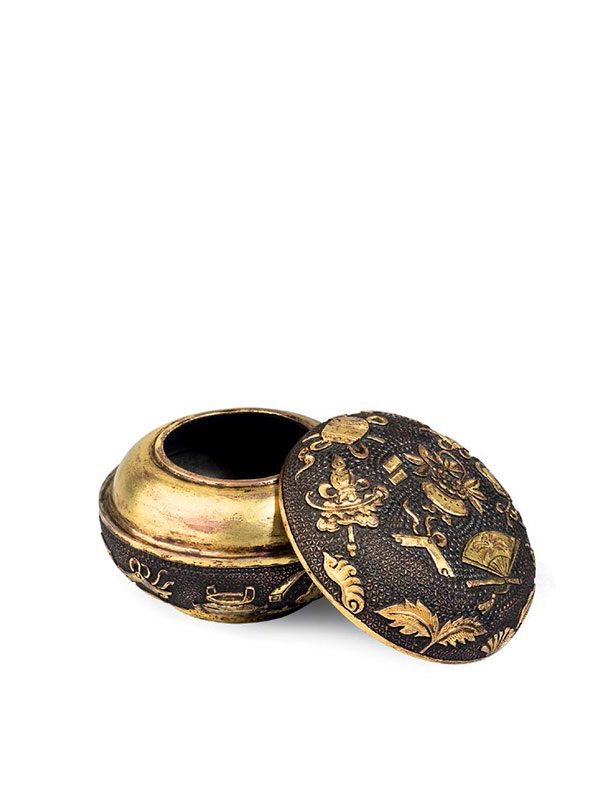 A gilded bronze circular box supported on a short, straight foot. The slightly domed cover and sides are fully decorated in relief with various auspicious items and antiquities against a punched ground of interlacing diapers. The items depicted include a fan, a flower basket and a fish drum, the attributes of Han Zhongli, Lan Caihe, and Zhang Guolao respectively, who are among the Eight Daoist Immortals.  There is also a conch and a parasol, two of the Buddhist auspicious symbols; some of the Eight Treasures: a wish-granting pearl, a stone chime, a pair of rhinoceros horns, a coin, an ingot, a wish-granting sceptre; and scholar’s items such as an archaic ding, scrolls and an inkstone. The box has a prominent incurving inner rim on the inside of the lower section, and this is also gilded on its exterior. The box is heavily cast and has acquired a beautiful, mellow patina.

As can be deducted from the unusual design of the extended inner rim on the lower section, this box has been used as a container for incense powders; the incurving rim keeping the incense from blowing away when the cover is removed. The combination of various Daoist and Buddhist auspicious items and scholar’s objects was popular during the Ming and Qing dynasties, and is known as the ‘Hundred Antiquities’ motif (baigutu in Chinese)1 . A comparable gilded bronze incense box, similar in size with an incurving lower rim, but with a more sketchy decoration of magnolia flowers and inscribed Hu Wenming on its base, is dated to the Wanli period (1573 – 1620) of the Ming dynasty and in the collection of the Museum of East Asian Art, Bath, England.2 A nearly identical incense box to the Bath example was exhibited in the Fung Ping Shan Museum, University of Hong Kong in 1986.3  A further comparable gilded box with a decoration of lotus flowers, signed Zhu Chenming and dated to the 16th – 17th century, is in the collection of the Victoria and Albert Museum.4