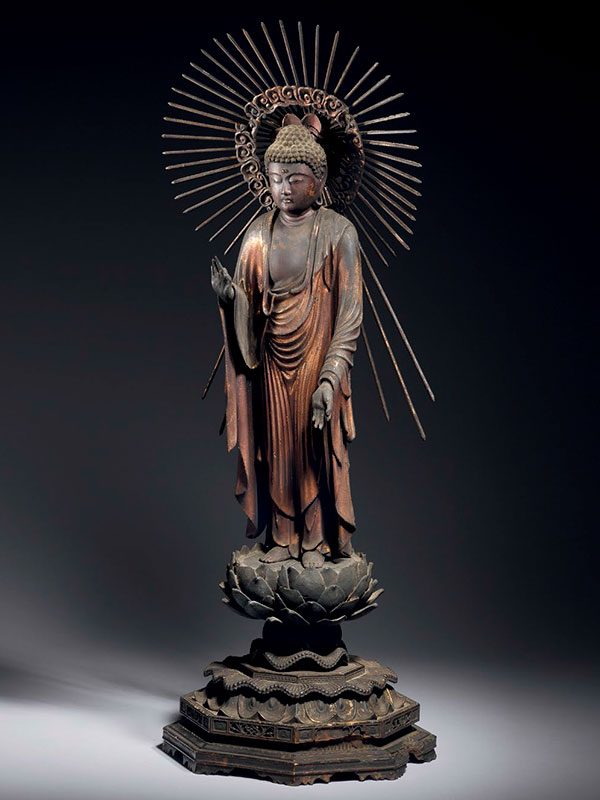 A carved wood figure of a Buddha standing on a tall, stepped lotus base, his right hand raised with the thumb and index finger clasped together.  His left hand is lowered, palm upwards, also with the thumb and index finger clasped together.  Both hands are held in the raigo-in (vitarka) gesture. The Buddha wears a long pleated robe revealing his bare chest and feet.  A separate, ornate halo is fitted behind him. The face has a serene expression with tightly closed eyes, and the pierced ears have long earlobes that are unadorned. A translucent jewel appears in the middle of his forehead. The Buddha has an almost black patina, with some remnants of gilding visible.

Stylistically this serene, skilfully carved wood figure of the Buddha carries on the tradition of Japanese wood sculpture from earlier eras, such as the Kamakura period, typical features of which are simple, folded clothing and a serene expression. The use of both the third eye of spiritual vision and the cranial bump is also seen in the earlier periods.  Japan saw a gradual decline in Buddhism in the late Muromachi period, which carried on during the subsequent Momoyama and Edo periods, and resulted in a parallel decline in Buddhist sculpture. The present image of the Buddha is proof that the tradition of Buddhist sculpture was not lost entirely. A comparable standing figure of Amida Nyorai on a lotus plinth and dated to the Muromachi period, 16th century, is in the Brundage collection at the Asian Art Museum of San Francisco.1