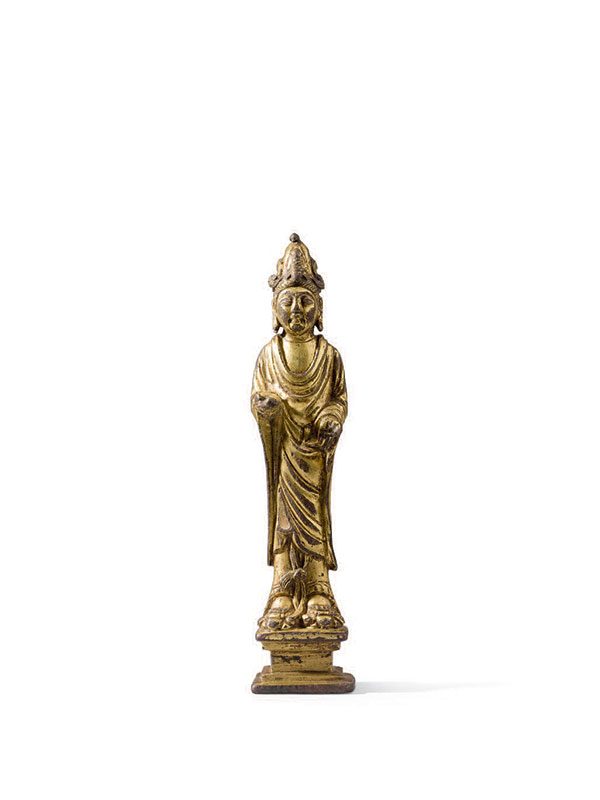 A giltbronze image of the bodhisattva Guanyin, wearing loosely draped, long.sleeved, pleated robes. The deity stands on a lotus flower base, which in turn is supported by a square, stepped pedestal. The deity holds both hands out in front of her; the left hand with palm turned upwards, the right hand in a cupped gesture. A tall headdress crowns the head with neatly coiffed hair. The ears have elongated lobes. The front of the crown incorporates an image of the seated Buddha Amitabha.

Small Buddhist images in metal such as the present representation of the Bodhisattva Guanyin were made for private worship, or for a portable shrine made for travelling, rather than for temples. The slightly plump facial features and the elaborate headdress are typical of Liao dynasty (907 – 1125) bronzes, as can be seen in two seated figures in the Rijksmuseum, Amsterdam.[1] Liao dynasty artisans retained the full.bodied imagery of the mature Tang dynasty.style, but added more details particularly in the features and the hands and feet. On the other hand, Song dynasty characteristics are evident in this sculpture, in particular the floor length inner garment, which can be seen on an example in the Shanghai Museum.[2] A much taller giltbronze image of Guanyin, dated to the Song dynasty, is in the University Museum, Philadelphia and is illustrated by Siren.[3] Another comparable giltbronze bodhisattva Guanyin, similar in appearance and style, is in the collection of the National Palace Museum, Taipei.[4 ]