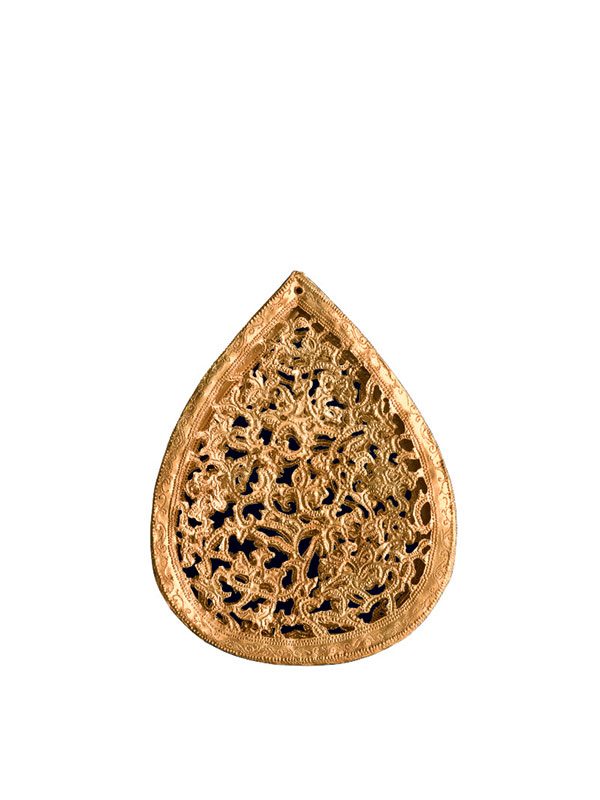 A yellow gold teardrop.shaped scarf pendant or pomander, consisting of two openwork halves fitting together to form a container with a recessed centre. The flat front and back are worked in fine detail on the exterior with mirrored intricate designs of curling branches, the edges of which are decorated with faux-beading. The pointed top of the pomander is drilled for suspension. The flat sides have faux-beading on the edges, and are punched with tiny floral scrolls. The high-carat gold retains a lustrous, golden sheen.

This intricate object in gold was made as a scarf pendant and possibly belonged to a high-ranking lady. The Chinese term for scarf, xiappei, first appeared in the Tang dynasty (618 – 906). Teardrop-shaped scarf pendants were created in the Song dynasty (906 – 1279) and especially favoured by women of the Southern Song period (1127 – 1279). Aromatic substances were sometimes put into these openwork pendants, turning them into pomanders that are scarf decorations as well as functional objects.[1] A painting of the Song dynasty Empress Xuanzu illustrates a similar teardrop-shaped pendant attached to the end of her scarf.[2] Most scarf pendants of this period are decorated with birds, flowers and dragons; the abstract design on the present example would therefore appear to be very unusual. A similar openwork gold scarf pendant decorated with flowers and described as a ‘perfume container’, is in the Mengdiexuan collection.[3] Another example, also dated to the Song dynasty, is in the Cheng Xun Tang collection.[4] A further comparable gilded scarf pendant of intricate design, excavated from a tomb in Fuzhou city, Fujian province in 1975 and dated to 1243 AD, is in the collection of the Fujian Provincial Museum.[5]