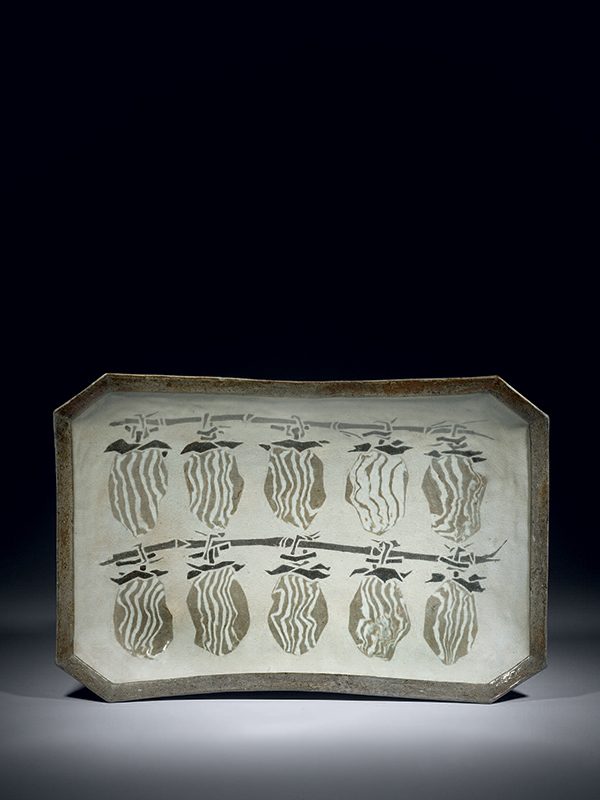 A ceramic deep dish of rectangular form with canted corners, supported on a short foot from which the straight sides rise steeply. The interior is inlaid in grey, white and black clay with a decoration of two rows of five dried persimmon fruits, suspended from vines. The raised rim is overlaid with a layer of dark grey clay. The reverse is plain, with the exception of a number of painted parallel straight lines that define the facets of the rim.  With the original tomobako, which has two inscriptions: Zogan Hoshigaki­-zu, sara (dish, inlay, decorated with dried persimmons) and with the artist’s name: Ryuzo­-saku with the seal Ryuzo.

Ryuzo was born into the Kyoto pottery family Asami Gorosuke. At a very young age he lost both his father and his older brother, the traditional heir to the family name, and he was subsequently raised by his Grandfather Gorosuke II, from whom he learned the ceramic arts. He graduated from the design department of Kyoto City Municipal  Art School in 1923 and studied Western painting at the Kansai Art Academy (Kansai Bijutsuin) in the following year. The family pottery tradition continues today: the current generation is Asami Gorosuke VI.  Asami Ryuzo first won at the Teiten exhibition in 1929 and was then awarded many consecutive prizes at the Nitten exhibitions, including a Tokusen prize in 1951 and a Ministry of Education award in 1964. Ryuzo was instrumental in establishing the Hakushokukai Group in 1951. After 1945 Ryuzo started experimenting by making inlaid work. In 1946 he exhibited the present plate with dried persimmon design and won the Tokusen prize at the second Nitten exhibition with it. In 1955 he started exhibiting at the Nitten exhibitions and in 1962 he exhibited and won a prize at the International Pottery exhibition in Prague. He was appointed president of the Japan Contemporary Art and Craft Association (Nihon Gendai  Kogei Bijutsuka kyokai). In 1967 he was given a highly prestigious prize by the Japan Art Academy (Nihon Geijutsuin) for his inlaid and special  slip, glaze work. In 1977 he was awarded the Order of Cultural Merit by Kyoto City for his life’s work.