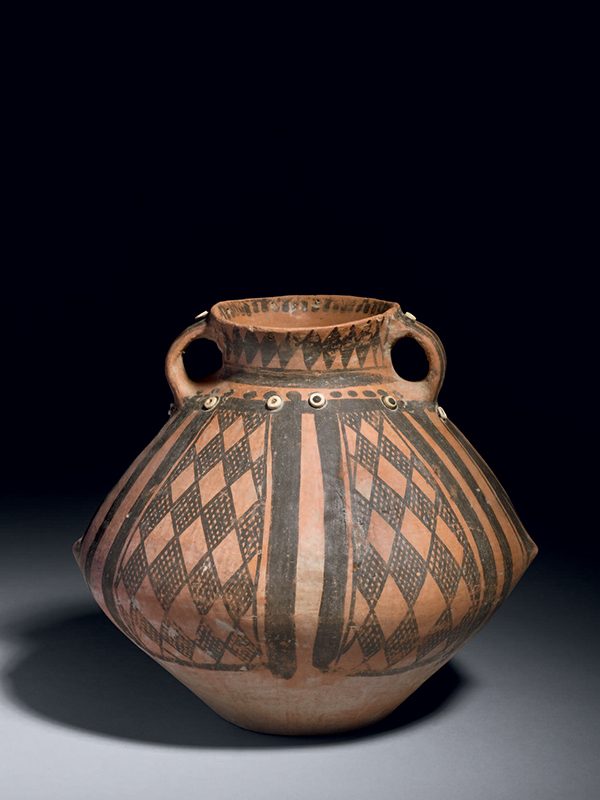 A red pottery jar with a rounded body and a sloping shoulder, the sides tapering down towards the flat base. The short neck flares outwards towards the everted rim. Two strap handles are applied to the sides of the neck, connecting the rim with the upper shoulder of the vessel. The neck is painted in black with diamond patterns and with two lines encircling a dotted band. The body is painted in black with a diamond.shape design, half of which is filled in with a net pattern. The lower part of the neck and the two ends of the handles are inset with small circular shells.

This elaborate pottery jar, unusually inlaid with shells, which were a precious commodity and a form of payment during the Neolithic period, is a very rare example of Neolithic pottery. The Majiayao culture is a name given by archaeologists to a group of Neolithic communities who lived primarily in the upper Yellow River region of Gansu and Qinghai provinces. The culture existed from 3100 BC to 2000 BC and is chronologically divided into three phases: Majiayao, Banshan and Machang. Thinly potted, relatively high.fired vessels with bold designs are typical of Majiayao culture pottery. The Banshan phase saw the introduction of red pigment in addition to the brownish.black colour that was already in use, and these warm colours were emphasized by strong burnishing. The shapes and designs of the Machang phase are derived from the earlier Banshan phase, however at this time burnishing was almost completely abandoned.[1] Two Machang-type pottery jars similar in shape, proportion and with comparable painted designs, excavated from Gansu province in 1973 and 1974, are in the collection of the Gansu Provincial Museum.[2] Another comparable Majiayao pottery jar, with bulbous form and painted with a cowrie shell pattern on the body, is in the collection of the British Museum.[3]