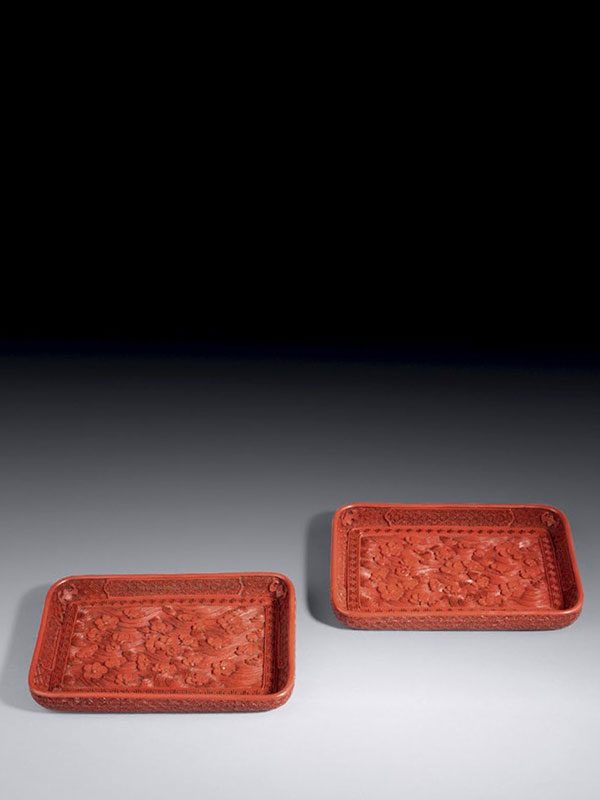 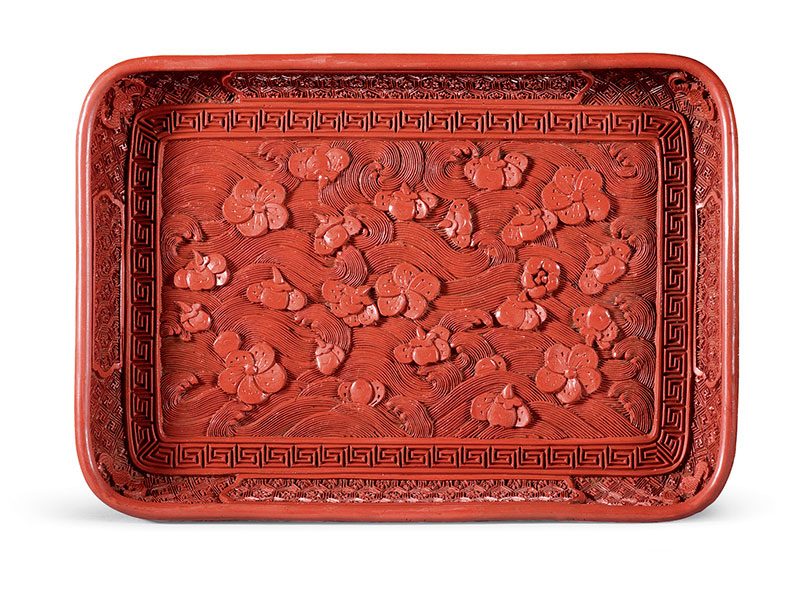 A pair of carved red lacquer trays of rectangular shape, each with rounded corners and supported on four bracket feet. The interior of both trays is densely carved in low relief with scattered plum blossoms floating on waves, and the scene is enclosed within a key-fret border. Each of the four inner corners is decorated with a minutely carved bat flying above a wan pattern background. The curved inner sides are carved with rectangular shaped panels, filled with hexagonal starburst diaper pattern. The exterior of the trays is carved in low relief with brocade pattern. Both bases are covered in black lacquer.

This pair of minutely carved lacquer trays was probably used for serving small utensils, such as teacups or boxes. According to the Qinggong neiwufu zaobanchu dang’an (Archives of the Qing Imperial Household Department Workshops, also known as ‘Qing dang’ for short), it is recorded that ten carved cinnabar lacquer tea trays were offered from provincial officials to the Qing court in the 59th year of the Qianlong reign.[1] A pair of lacquer boxes of four-lobed shape, similarly carved with plum blossoms floating above waves, each named and marked as Fei Hua Bao He (‘treasure box of laying flowers’) and bearing Qianlong reign marks, is in the collection of the National Palace Museum, Taipei.[2] Another red lacquer box in the shape of a plum blossom, carved with plum blossoms floating above waves, which bares a Qianglong reign mark, is in the collection of the Palace Museum, Beijing.[3] A slightly larger carved cinnabar lacquer tray of lobed shape with a Qianlong mark is in the Chao collection.[4] Another tray of rectangular shape and dated between the late 18th to early 19th century is in the Muwen Tang collection.[5]