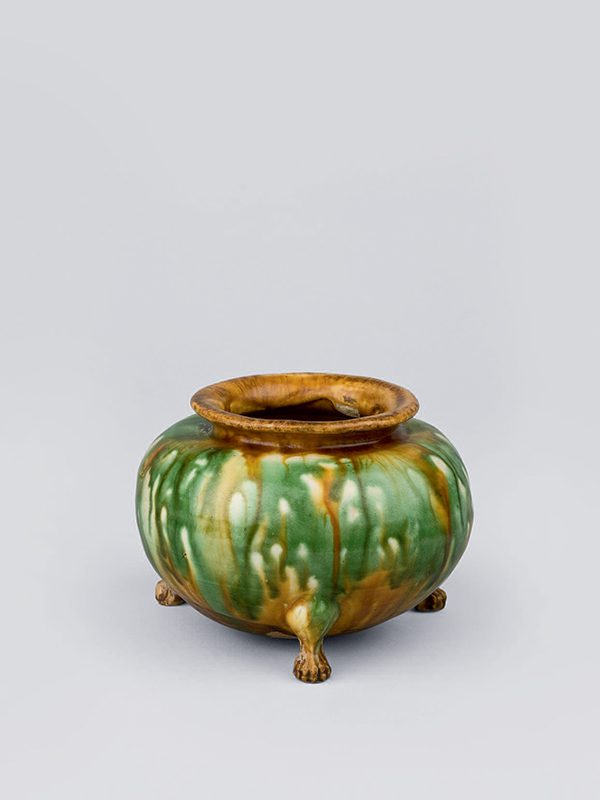 A pottery tripod jar with a globular body, its well-rounded sides rising from a convex base and terminating in a lipped rim. The body is suppor ted on three short, bowed legs that take the form of animal paws. The exterior of the body and legs is applied with a layer of white slip, which in turn is covered in splashed sancai glazes of straw-white, green and amber tones, stopping well short of the base of the jar in an uneven line. The base and interior are unglazed and show the fine buff pottery body.

Tang lead-glazed earthenwares are known in China as sancai wares; san meaning three, cai meaning colours – and invariably comprising straw-white, amber and green tones. Although many pottery pieces are actually applied with these three glazes, such as the present example, sancai has become a collective term since other coloured glazes have been discovered.[1] The shape of this tripod globular jar occurs in Tang dynasty metal work with Buddhist connections, both with and without a cover. An example of such a bronze tripod jar with cover is in the collection of the Idemitsu Museum of Art.[2] Two very similar pottery tripod jars comparable in the shape of the body and with similar legs in the form of animal paws, are in the Meiyintang Collection.[3] A closely related pottery lidded jar with comparable sancai glazes and also with legs in the form of animal paws, excavated from a tomb dated to the Tang dynasty, is in the collection of the Zhengzhou Provincial Cultural Relics and Archaeology Research Institute.[4]