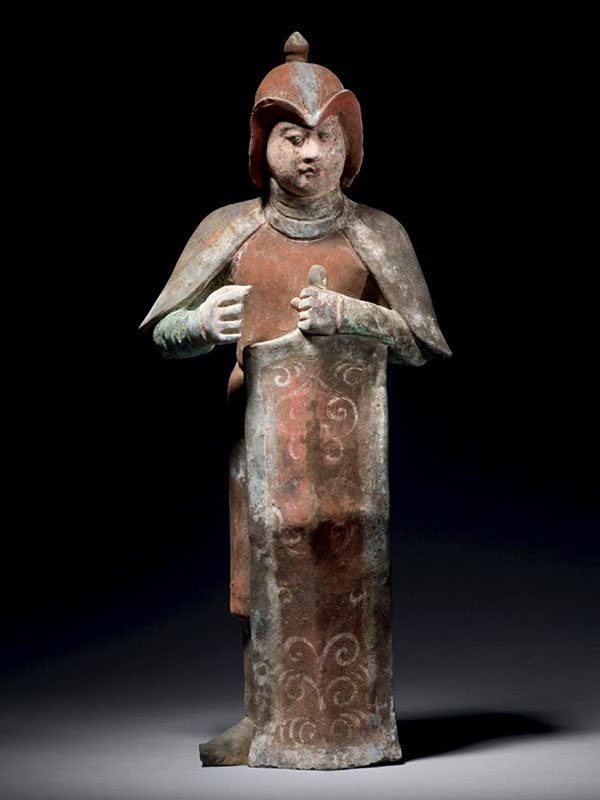 A pottery figure of a soldier, standing tall and slightly inclining his head towards the left. He holds both his arms up towards his chest; his right hand is clenched in a fist, whilst his left hand holds a long, rectangular shield resting on the floor in front of him. He is dressed in a long-sleeved robe painted with red pigment, and wears a layered neck guard and shoulder guards in dark grey colour. His head is protected by a stylish helmet with two high-arched rims, revealing his round face with well-defined features in an alert expression. The rectangular shield, with a protuberance in the middle, is adorned with scroll pattern in white lines against a red background.

Finely made pottery figures have been unearthed from Tang tombs, reflecting how lavish and extravagant funerals for the Tang nobility were. The present figure, compared with those of earlier periods (see p. 28), has a very lifelike expression and strongly modelled native Chinese features. Two Tang figures of warriors covered in a green glaze are closely comparable in their posture and the design of the shields: one was excavated from a tomb in Changsha city, Hunan province in 1976, and is now in the collection of the Hunan Museum; another one was excavated in Laohekou city in Hubei province in 1986 and is now in the Laohekou Museum.[1]  A larger Tang figure of a warrior, comparable in costume and posture, but with colourful pigments painted over its glazed earthenware body, is in the collection of the Royal Ontario Museum.[2]