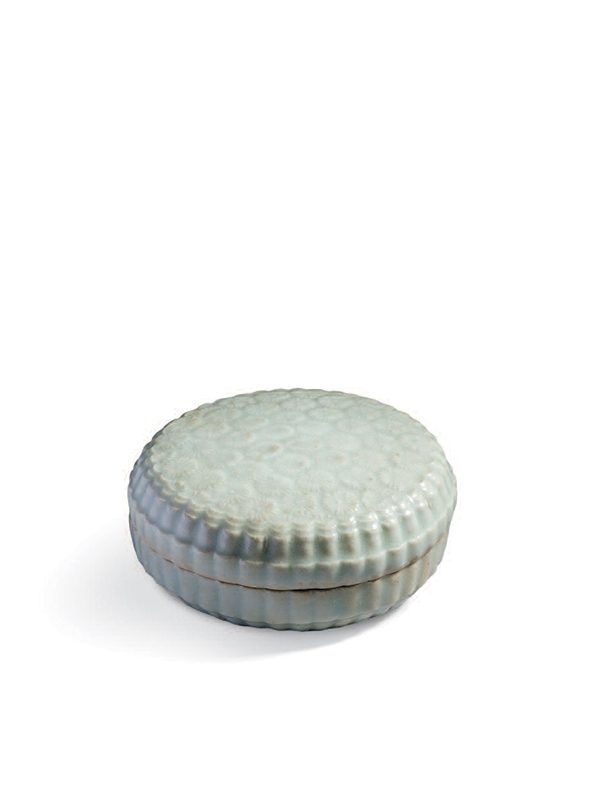 A circular qingbai porcelain box of compressed drum shape with neatly lobed sides and a slightly concave base. The domed cover has a concave top, which is mould-­impressed with small chrysanthemum flowers. Both the exterior and interior of the box and cover are coated in a thin, translucent bluish­-white glaze, leaving the rims and base unglazed, exposing the sugary white body, which has some brown and black firing marks. The base is mould­-impressed with a five­-character mark reading Duan jia he zi ji (box made by the Duan family). The box has two unglazed vertical strokes on the side edges to indicate the correct alignment of both parts.

This finely potted box was originally intended for storing cosmetics and as such would have been used on a daily basis. The base is impressed with a so-­called shop’s mark, naming the family that produced or commissioned it.[1] About ten workshops are known to have produced high quality boxes, those of the Duan family being among them. Qingbai boxes impressed with comparable marks are in the collections of the Asian Art Museum of San Francisco (inscribed Lan jia he zi ji, ‘box made by the Lan family),[2] and the Museum of Oriental Ceramics, Osaka.[3]  A very similar qingbai porcelain box of comparable shape and design but smaller in size, excavated from a sutra mound at Wakayama-­ken in Japan and dated to the Southern Song dynasty, 13th century, is now in the collection of the National Museum,  Tokyo.[4]  Another closely comparable cosmetic box slightly smaller in size but with a similar design is in the collection of the Asian Art Museum of San Francisco.[5]