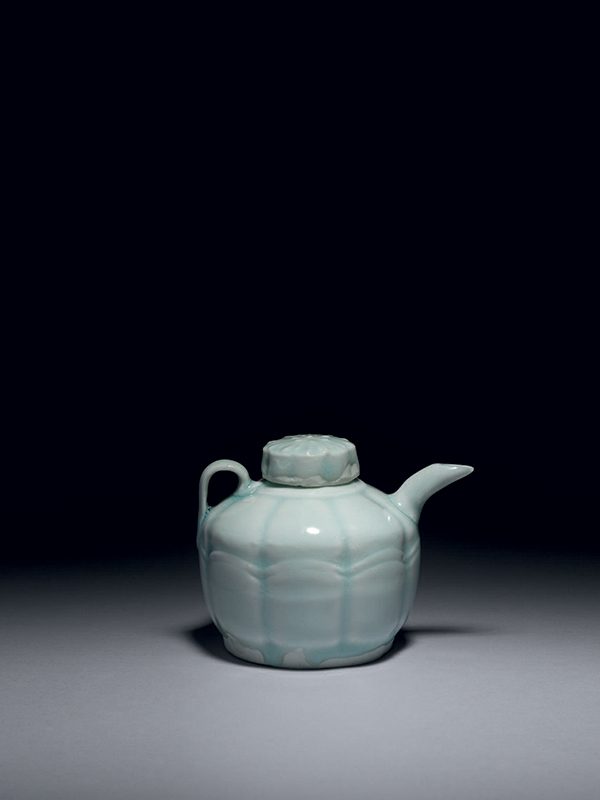 A qingbai porcelain ewer of compressed globular shape, the body with a flat base. The stepped shoulder is applied with a small loop handle opposite a short, curved spout.  The lower body  is moulded with arched lines that visually divide the body into eight panels. The domed cover has a moulded decoration of starbursts and two small holes for tying it to the handle. The porcelain is covered in a transparent glaze of pale blue hue, leaving only the base unglazed, showing the fine-­grained white porcelain body, which has characteristic brown firing marks.

Larger qingbai ewers of this form sometimes come with a separate warming bowl, and the unusual design of moulded panels around the lower half of the body of this interesting ewer creates the illusion that it is sitting in just such a bowl. In this case, however, it forms an integral part of the piece. Small qingbai ewers of this type gained popularity during the late Northern Song to early Southern Song dynasty, and were still used until the Ming dynasty (1368 – 1644).[1]  Zhao and Liu illustrate a very similar Song dynasty qingbai ewer, which they identify as having been produced at the Hutian kiln.[2] Another closely comparable qingbai ewer of similar size and form, dated to the Northern Song dynasty (960 – 1127), is in the Muwen Tang Collection.[3]  A third qingbai ewer of similar form, excavated from a Southern Song tomb in Nanping city in Fujian province, is in the collection of the Nanping Museum.[4]