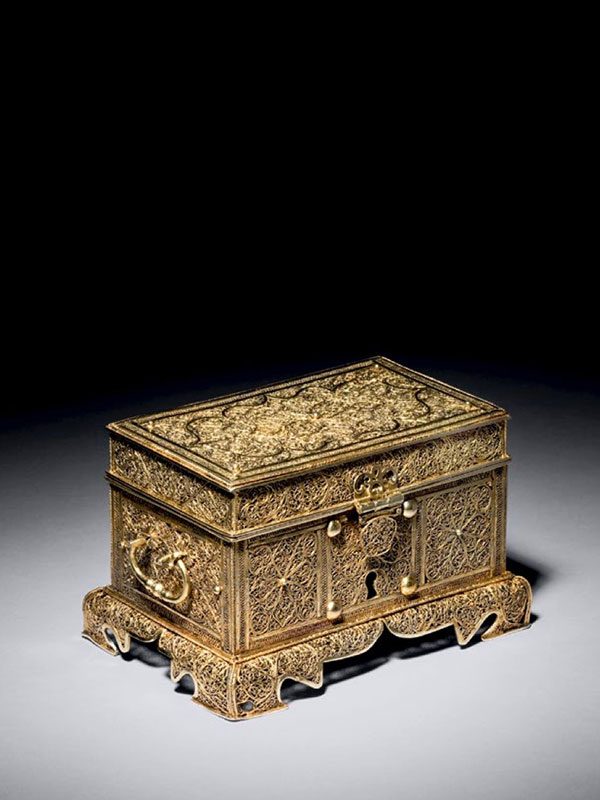 India, Goa, perhaps made with the assistance of Chinese masters mid-17th century 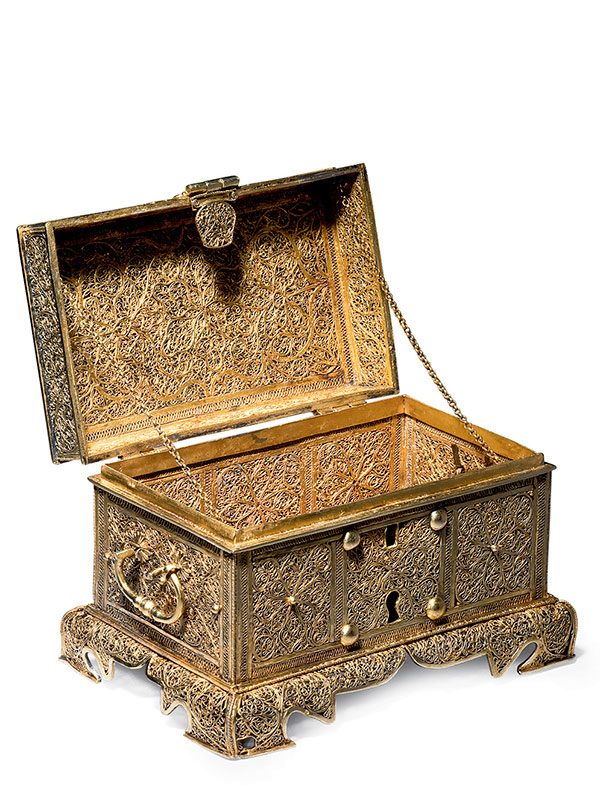 A silver gilt filigree rectangular casket with a flat lid, supported on four bracket feet. The casket is made up of lace-like openwork silver filigree work, composed of foliate motifs and small swirl patterns. The flat lid has a central flower issuing undulating tendrils, outlined with wider borders. The front and back panel of the body are divided into three sections, each decorated with floral pattern. The front has a round lock plate and a hinged cloud-form clasp. The hinged cover connected to the box with two chains inside the box. Two hinged loop handles are attached on the sides. The exterior is gilded and well-polished.

The term ‘filigree’ comes from the Latin filum (thread) and granum (grain), indicating the technique of using fine silver thread and small grains to make objects. The filigree technique existed in ancient cultures from the second millennium BC,[1] and was used in almost all European and Asian countries in the 16th and 17th centuries. Filigree produced from the 17th to the early 19th century was almost never given a mark, and Menshikova has commented [2] “the question of who made it cannot be answered: was it Chinese silversmiths working in the colonies in Southeast Asia or in India, or masters in, for instance, Batavia (now Jakarta).”[3] The combination of wide, flattened wire components with fine twisted filigree work is found on articles often ascribed to Goa during the second half of the 17th century. Menshikova carefully refers to filigree items of this type as having been made by ‘Chinese masters in India or Southeast Asia’, which leaves open the possibility that such items might have been made in Batavia perhaps, and most probably traded by the Dutch East India Company (VOC). Two comparable mid-17th century silver caskets were originally in the Winter Palace collection where they remained until 1789, and are now in the State Hermitage Museum in St. Petersburg.  One of similar size and of closely comparable decoration and design is attributed to India, Goa with possible assistance of Chinese masters.[4]  The other larger casket, very similar in style to the present casket, and decorated
with traditional Chinese motifs, is attributed to China, or Chinese masters working in the Portuguese or Spanish colonies in Southeast Asia.[5]