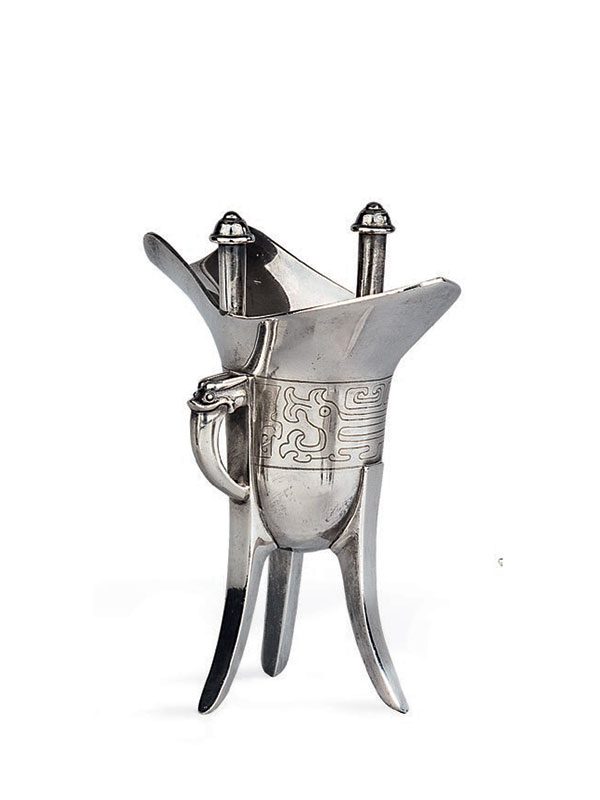 A miniature silver vessel of archaic bronze jue form, the deep U-shaped body supported on three slender, slightly splayed legs, which end in sharp points. The vessel has a long curved spout, and opposite it a pointed flange. Two circular posts capped by mushroom-shaped finials are raised from the middle of the mouth. A C-shaped handle with a dragon’s head is attached to one side. A single band of engraved decoration containing two stylised dragons encircles the body. The convex base of the vessel bears two marks: Chun Yin (‘pure silver’) and Mei (‘beautiful’).

These delicately made miniature silver vessels, truthfully representing their archaic bronze prototypes that date from the Shang (16th century- c. 1046 BC) or Zhou dynasty (c. 1046 – 221 BC), were probably intended for the local Chinese market.  During the Qing dynasty (1644 – 1911), collectors are said to have devoted much time to amassing miniature treasures, which they kept in curio cabinets that were fitted out with a series of small compartments. Miniature bronze vessels, many inlaid with gold and silver, were appreciated and treasured by collectors.[1]  Such miniature silver pieces might have served the same function, being appreciated in scholar’s studios. A comparable but much larger silver filigree incense burner of archaic fang ding form, dated to the first half of the 18th century, is in the collection of the State Hermitage Museum in St. Petersburg.[2]