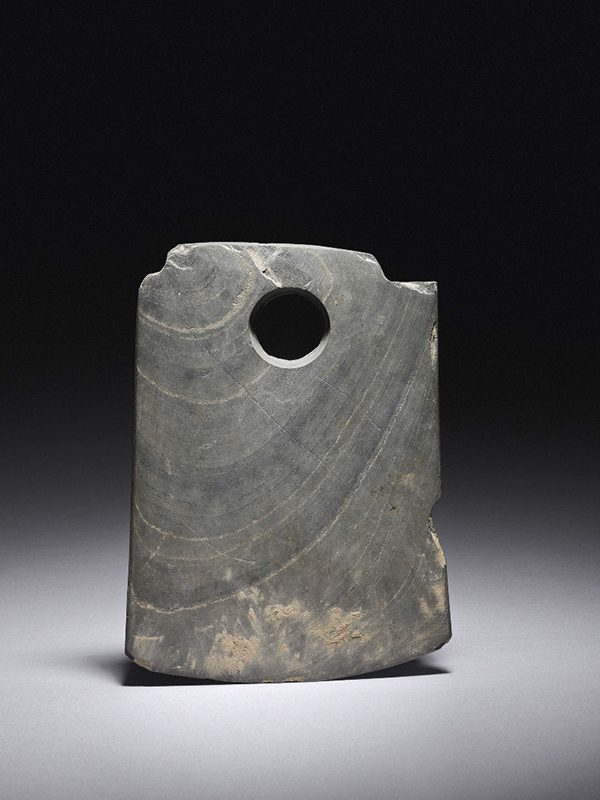 A stone axe of roughly rectangular form, the bottom of the blade rounded and worked into a sharp edge. The top edge has a notch to either corner. The axe is drilled from both sides with a neatly finished central aperture with a ridge in the middle. The smooth, greyish stone has pronounced circular markings.

This charming small jade carving was most likely intended for use on the scholar’s desk as a brush rest, the craggy rocks forming a perfect tool for this. The theme of a scholar and his servant going for a leisurely stroll through a mountainous landscape perfectly enhances its function. The decoration of bats (fu) hovering above waves (hai), with pine trees growing among mountains together forms a pun for, ‘May your blessings be as deep as the Eastern Sea, and may you live to be as old as the Southern Mountain’ (furu donghai, shoubin anshan). This famous and widely used birthday greeting is from the work of Liu Ji, the prime minister of the first emperor of the Ming dynasty, Ming Tai zu (1368 – 1398). [1] A comparable celadon jade brush rest of similar size, also carved with birthday greeting motifs showing a sage, his servant, a  rane and a deer among rocky mountains, was in the Qing Court coll ection and is now in the collection of the Palace Museum, Beijing.[2]