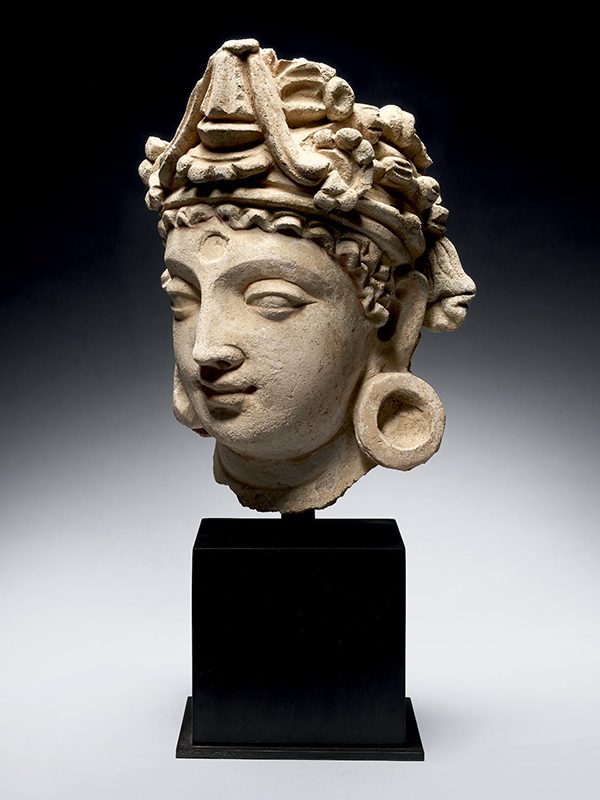 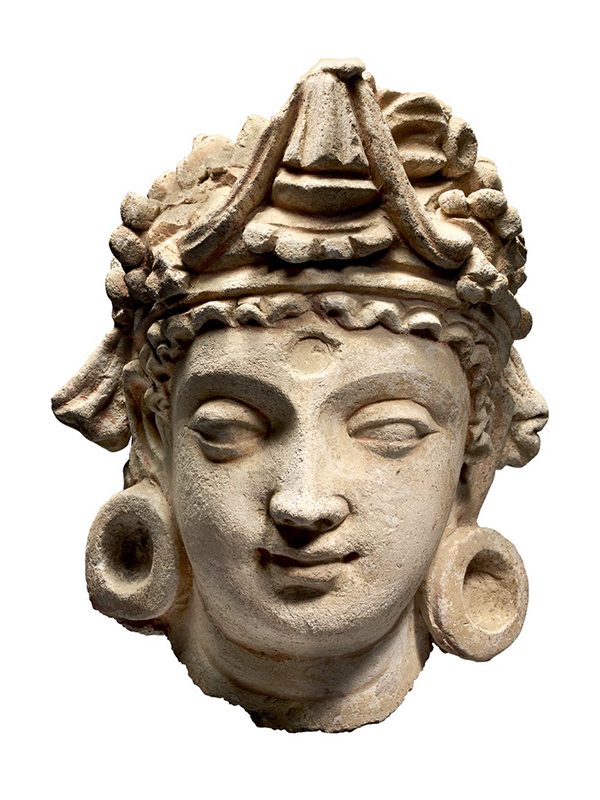 A stucco head of the bodhisattva avalokitesvara, the headgear arranged on top of the head in an elaborate crown, tied with a cloth at the back.  A neat row of curly hair is visible, framing his forehead. The strong face has regular features: almond-shaped eyes under low fleshy lids, the sharp edges of the eyebrows providing a continuous arc from brow to the narrow, straight nose, a shapely-lipped mouth set back above a full chin.  A space that would have originally contained an urna is visible low on his forehead just above the nose. The ears are adorned with elaborate circular ear-ornaments. The head retains part of the neck. Remnants of red pigment are visible on numerous parts of the head.

This finely worked stucco head of bodhisattva avalokitesvara is distinguished by great attention to detail. The piece originates from the Gandhara region, the area that is present-day Afghanistan-Pakistan. The sensitive modelling was achieved by working in stucco, giving it a more expressive quality compared with the formal, somewhat harder, images in stone.  Although moulds were used to produce the bodies of stucco sculpture, the face and headgear appear usually to have been executed freehand.  The part played by bodhisattvas in Buddhist art is second only to that of the Buddha himself. As can be seen in this beautifully carved head, bodhisattvas are typically depicted dressed and bejewelled like a magnate of the region. Avalokitesvara (‘Lord who looks down’) is a bodhisattva who embodies the compassion of all Buddhas. This head was most probably once part of a stele that adorned a stupa or other Buddhist monument. It shows clear Greco-Roman influences, whilst the iconography is of Indian origin. Stylistically the present bodhisattva can be compared with a Buddha head published by Kurita. 1