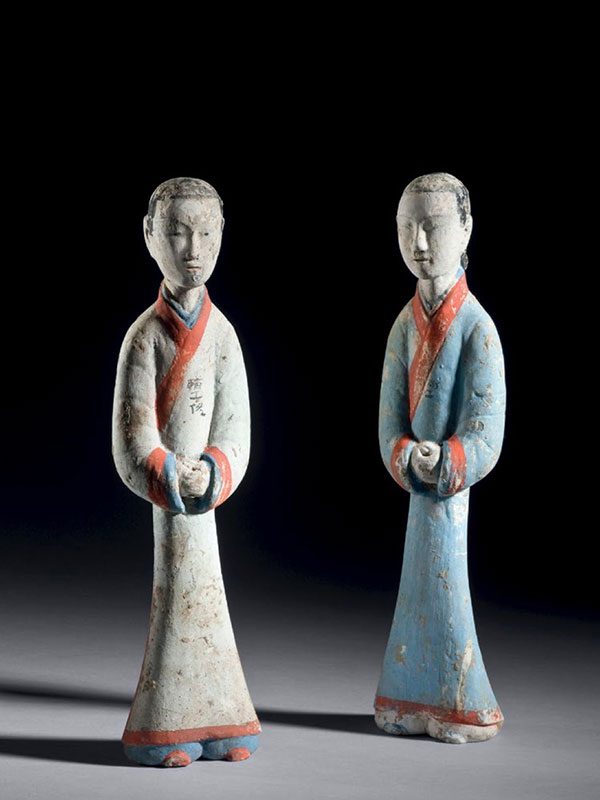 Two pottery figures of attendants, standing dressed in long, layered robes that flare at the bottom. They wear baggy trousers, and the tips of their slippers are just visible, protruding from underneath the robe. The hands are folded together.  The face of each figure is modelled with finely detailed features, which are outlined in black and red pigments on a pink ground. Their long hair is loosely tied together in a knot, which extends down the backs.  The figures retain most of the original colour scheme of strong pigments; one of the figures wears a red-edged, blue robe over white trousers.  The robe is painted in black on the chest with the inscription deng gong (‘lamp operator’). The other figure is similarly attired in a white robe over blue trousers, and is inscribed lun gong tong (‘wheel worker’).

These two diminutive pottery figures are highly unusual for the inscriptions on their robes, allowing us to identify exactly their line of work and status. No other figures with such inscriptions appear to be recorded. It is interesting to see confirmation of the fact that lamps played a major role in Han dynasty funerary rites, which is also witnessed by the great number of lamps in ceramic, metal and other materials that have survived.  The state of preservation of the pigments is also remarkable. Stylistically, these figures resemble the much larger standing and kneeling figures that frequently occur during this period, several examples of which can be found in the Shaanxi Provincial Museum.[1]  In particular the hairstyle with a loosely knotted plait hanging down the back, appears to be a typical feature of these Western Han figures, as are the hands, clasped together in front of them.