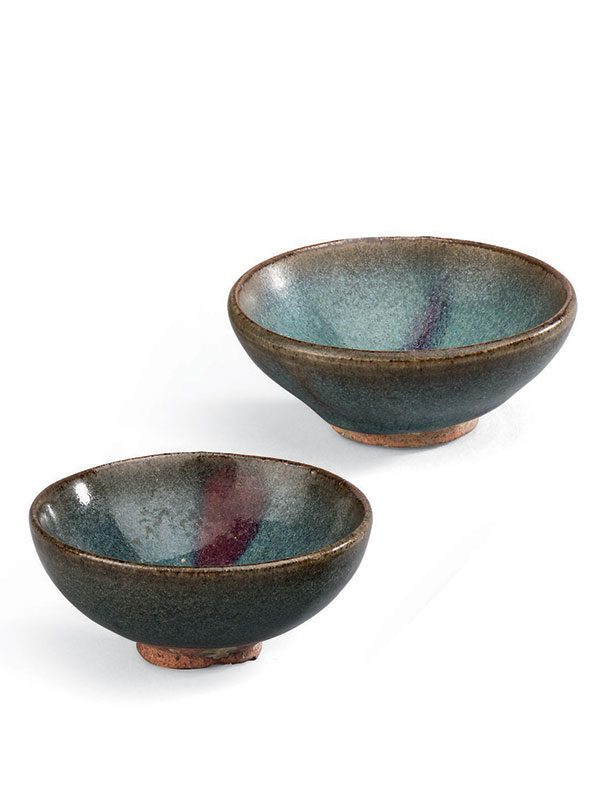 Two small stoneware bowls, each with a sturdily potted body supported on a low splayed foot. The steeply rounded sides straighten and curve in at the rim.  Each bowl is covered in a blue glaze that turns a transparent olive-brown tone at the rim. The interiors are enlivened by a single splash of purple and reddish purple that extends from the rim to the centre of the bowl’s interior.  On the exterior the glaze stops short of the unglazed foot, where it pools in thick drops.  The unglazed stoneware is fired to an orange tone, with some small specks of grit attached to the base and the foot.

Notable for their small size, which lead to the common reference of ‘bubble’ bowls, these two small Jun bowls would appear to be too small for drinking tea and might instead have been used for drinking wine. Their incurving rims, as opposed to a flared rim that was preferred for tea drinking, further strengthen this hypothesis. It is clear from early references that the colour of the ceramic wares was valued for its ability to enhance the colour of the tea, an important criterion in the early tea cult.  It is likely that the colours of Jun ware and tea were not considered compatible.1  This type of small Jun ‘bubble’ bowl had already been used during the Northern Song dynasty (960 – 1127). The current examples, with their coarser bodies in orange tone, are likely to have been produced later during the Jin or Yuan dynasty.  Two comparable Jun ‘bubble’ bowls with purple splashes, of similar size and dated earlier to the Northern Song dynasty, 11th – 12th century, are in the Meiyintang collection.2 Another Northern Song example is in the collection of the Victoria and Albert Museum.3 Examples dated to the Jin or Yuan dynasty can be found in the collections of the Metropolitan Museum of Art4 and the British Museum.5