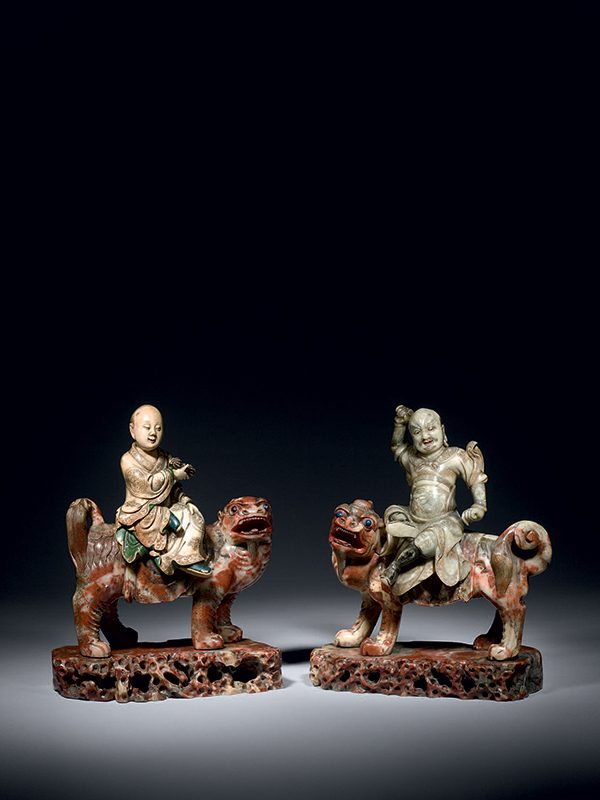 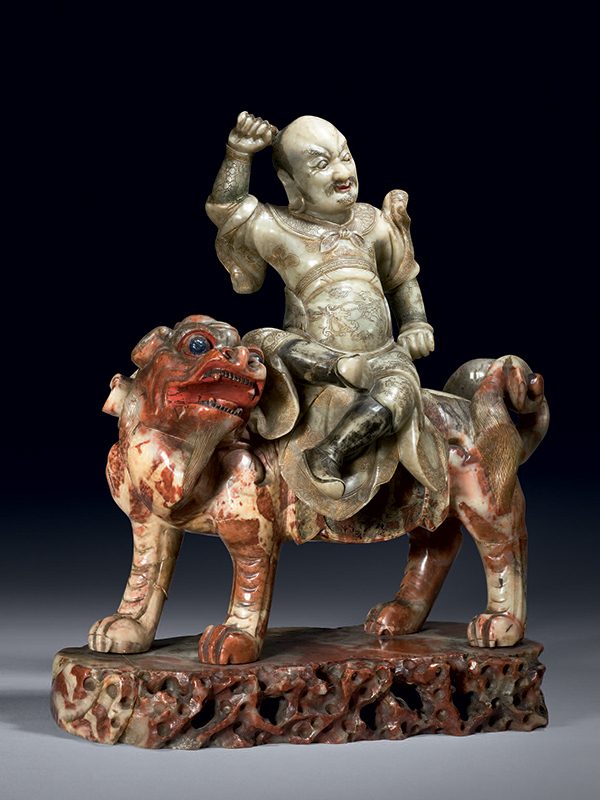 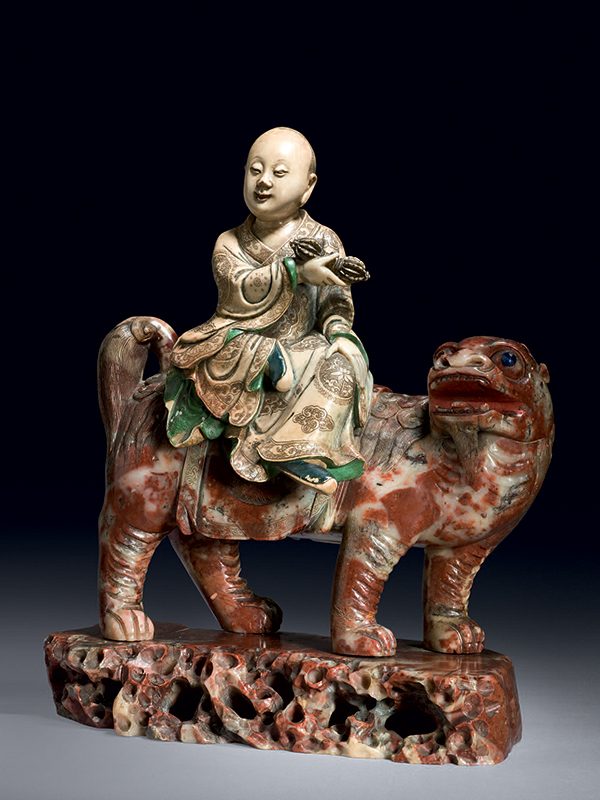 Two large soapstone groups, respectively depicting the deities Vajraputra and Vaishravana, each seated in a pose of ‘royal ease’ on the back of a lion dog.  Each animal is in turn supported on a separately carved soapstone base.  Vajraputra wears a loosely fitting robe incised with lotus and ruyi patterns. His right hand, crossed in front of his chest, holds a vajra sceptre, whilst his left hand rests on his knee. His face is carved in detail with a demure expression. Vaishravana wears a fitted robe, tied around his waist, with a knotted scarf around his neck. His clenched right hand is lifted above
his head and the left hand is down at his side. His facial expression is solemn and fierce, with bulging eyes and arched eyebrows.  Both figures wear boots. One of the lion dogs has a single horn and the other one has two. Both animals turn their heads and have their mouths open, revealing their teeth. They have curled, bushy tails, which are partly draped over their hindquarters. The material from which both Vajraputra and Vaishravana are carved is of ivory white colour, contrasting with the light pink and purple-­coloured material used for the lion dogs and the bases.  Some traces of blue, green, black and red pigments are visible as well as some gilding in the incised lines.

These two Buddhist soapstone figures are highly unusual both for their magnificent size and their exquisite carving. The use of soapstone or shoushanshi goes back as far as the Southern and Northern Dynasties (420 ­- 589).  Soapstone was popularly used for scholars’ objects during the Tang and Song dynasties. Vajraputra, also known as Xiaoshi luohan in Chinese, is one of the 18 luohans, representing freedom from inhibition and playfulness. He is often portrayed with a Buddhist lion. Vaishravana, also known in Chinese as Duowen Tianwang, is the chief of the Four Heavenly Kings and the Guardian King of the Northern Direction. When shown seated, he is usually in the pose of ‘royal ease’, and rides on his mount, a snow lion. A very similar soapstone figure of a Manjusri seated on a lion, closely comparable in size, style, decoration and colour of the stone, is in the Shlossmuseum, Gotha, Germany.[1] Another comparable soapstone luohan figure in similar style, dated to the 1700­-50, is in the collection of the Victoria and Albert Museum.[2]

PROVENANCE
By repute:  from the collection of Karl With, Germany

Private collection, Europe, bought  at the Delft fair in 1974 from Kunstzalen A. Vecht, Amsterdam