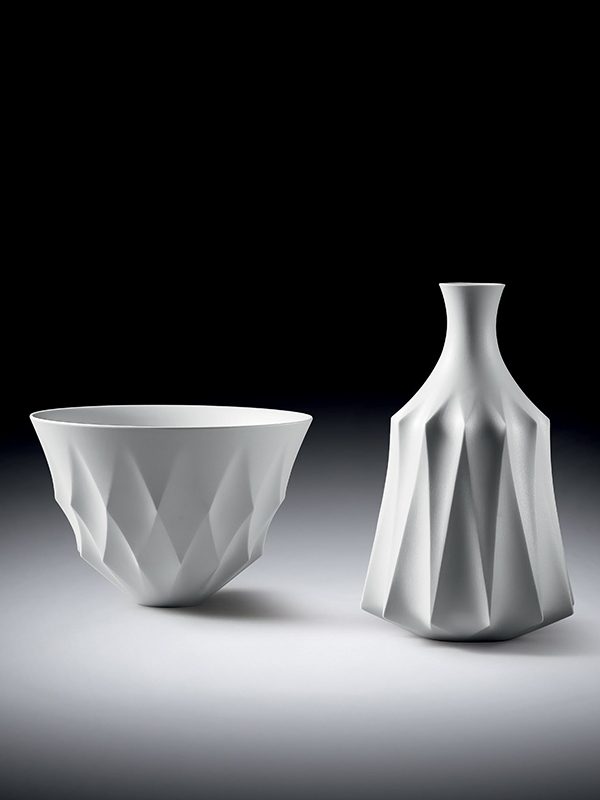 A porcelain bowl and a bottle, both carved with a continuous pattern of lozenges, all of which have a concave centre. Both the delicately potted bowl and the bottle are completely covered inside and out in a pure white glaze. Both pieces are preserved in their original tomobako or wooden box. The tomobako of the bowl is inscribed Seihakuji chawan (pure white porcelain, a bowl) and the tomobako of the vase Hakuji-bin (white porcelain vase). The backs of both boxes are inscribed Yoshinori saku (made by Yoshinoro).

Yoshinoro Ohno was born in 1978 and established his studio in Tsukuba, Ibaraki in 2004.  He studied pottery under Ito Motohiko (born in 1939), who was also originally from the same town of Fukuoka.  In 2012, he was invited to exhibit at the Vallauris International Biennale, which was held at the Picasso Museum, Vallauris, France. Ohno creates white porcelain filled with numerous thoughts; he made a series of works based on the form of diamonds, of which the present bowl and bottle are fine examples. Yoshinori Ohno is a dreamer, a purist, and at the same time, a philosopher.  Ohno’s vessel forms are manifestations of life itself.