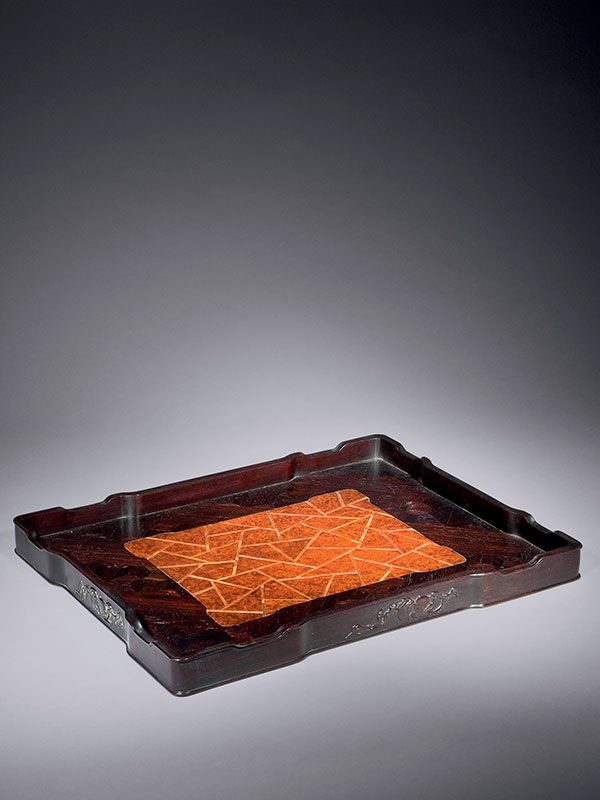 A zitan tray of rectangular shape with stepped side railings and a flat base. The tray is inlaid with a central panel of ‘cracked-ice’ pattern, composed of irregular burlwood segments, separated by lines made up of spotted bamboo and surrounded by zitan marquetry.  On the exterior, the centre of each side is carved in relief with a motif of double peaches on branches. The top rim is channelled. The wood is well polished, and the zitan displays the typical purplish hue with characteristic minute silvery streaks.

The present Chinese scholar’s tray is a very fine example; it is of beautiful quality and has an unusual combination of three different types of woods.  Zitan (‘purple sandalwood’) is the most dense and slow growing of hardwoods used to create objects for the scholar’s desk, and occurs rarely, due to size limitations and the delicate nature of zitan. Spotted bamboo (ban zu, also known as xiangfei zu in Chinese) and burl wood (huamu) are commonly used for making Chinese furniture and scholar’s objects. Scholar’s trays (ducheng pan in Chinese) were used to present a variety of scholar’s utensils, partly so that they could be easily moved together, and partly for purposes of display.[1] Examples of scholar’s trays are in the Qing Court collection: a bamboo-veneered tray together with a set of writing materials is now in the collection of the Palace Museum, Beijing;[2] two wooden trays together with jade and cloisonné pieces are displayed in the main hall of the Mental Cultivation Hall in the Forbidden City.[3]  Two published wooden trays are comparable to the present example: a zitan tray was included in the 1986 exhibition Arts from the Scholar’s Studio;[4]  a tray made of huanghuali is in the collection of the Minneapolis Institute of Arts.[5]