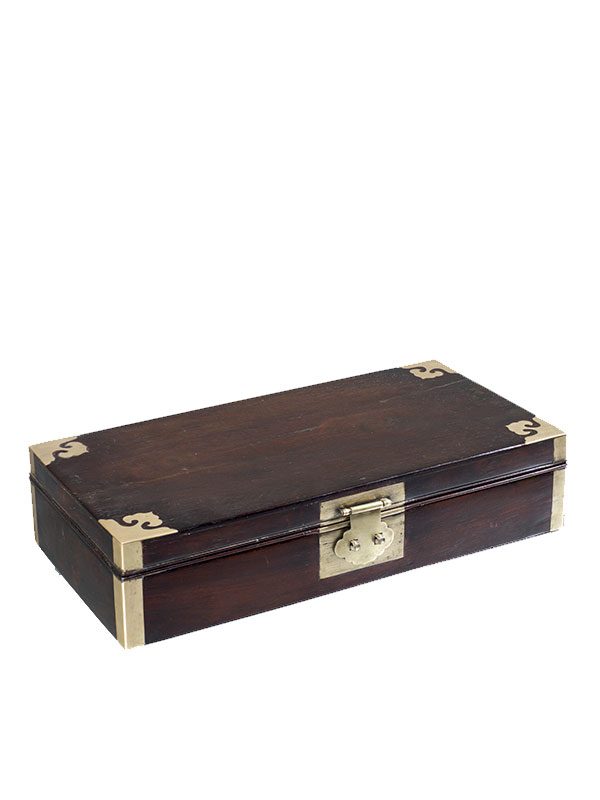 A rectangular zitan document box, the horizontal edges of both box and hinged cover carved with a beaded lip. The front panel has a rectangular lock plate in baitong (yellow metal) with a hinged clasp in the form of a ruyi that fits neatly over two ring fittings, enabling one to lock the box. A ruyi-form baitong mount is placed at each of the four corners of the lid. The four corners are further encased in baitong on the vertical sides. At the back, two strap hinges in baitong hold the cover in place.

Boxes such as this were generally used for the safe storage of important papers, documents or writing utensils. Zitan (‘purple sandalwood’) is the densest and slowest growing of hardwoods used for scholar’s utensils. During the Qing dynasty, zitan largely replaced the preferred wood of the Ming dynasty, huanghuali, becoming the most popular material for furniture at the Qing Court. The corner application of baitong mounts serves both as decoration and as reinforcement of the joints, making boxes like this also suitable for the storage of heavier, valuable items. A similar box in huanghuali of virtually the same proportions from the collection of Dr Michael R. Martin was included in an exhibition at the Altfield Gallery in Hong Kong in 1984.[1]