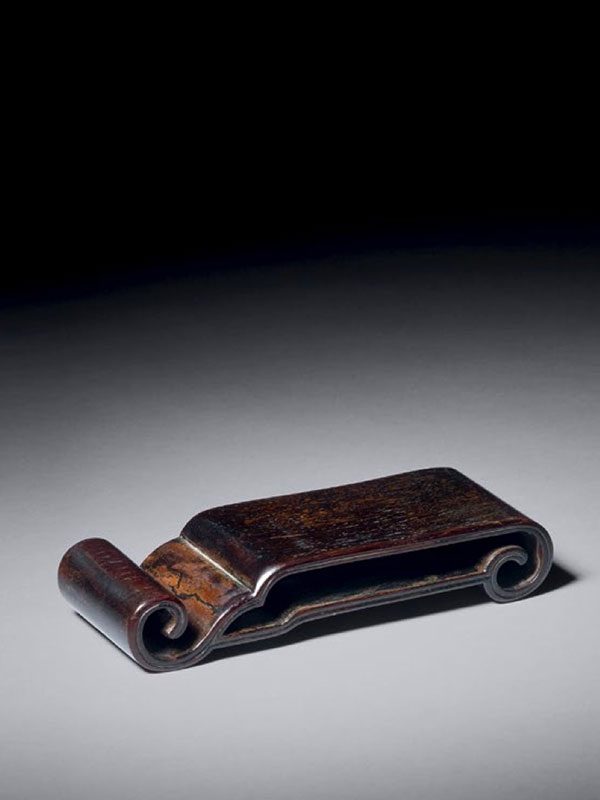 A small zitan ink rest of rectangular shape with flat surface and scroll ends, with one end extended and curled back. The two scroll ends are connected with a recessed panel. The sides are finely incised with a grooved line, appearing as a double-beaded effect. The wood is well polished and has the purplish hue typical of zitan.

This ink rest is a very fine example for its beautiful quality of the zitan wood and exquisite carving.  It is fashioned from a whole piece of zitan wood, which is a lavish way of using this very expensive material. The shape of this ink rest reminds one of Ming furniture, as the fashion of re-inventing antique pieces for the scholar’s desk was very popular during the Qing dynasty. A comparable zitan ink rest, inlaid with a cloud design in cloisonné enamel, similar in the scroll-ends and the recessed lateral strips, is dated to the early Qing dynasty and is in the Qing Court Collection at the Palace Museum, Beijing.[1] Three comparable Qing dynasty ink rests in jade, similar in their scroll-end shape, are respectively in the collections of the Palace Museum, Beijing[2] and the National Palace Museum, Taipei.[3]