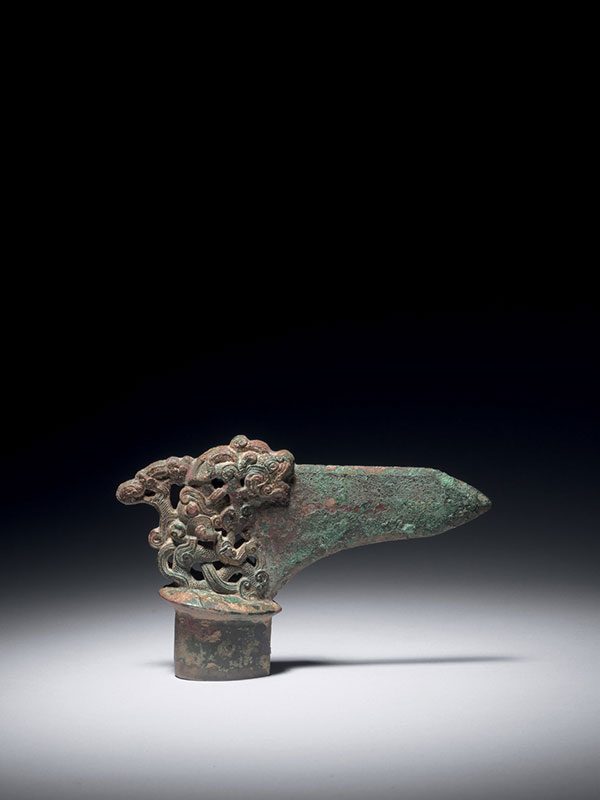 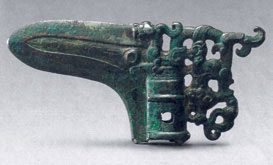 A ceremonial dagger-axe, ge, with a flattened tubular socket, on top of which sits a hybrid mythical creature, consisting of a stylised bird and a mythical beast in openwork. The mythical beast clasps the blunt blade of the axe with its jaws and claws. The animals are completely covered in dense, finely grained scales. The blade is plain. The dagger-axe has a deep green patina.

This dagger-axe, ge in Chinese, was originally mounted on top of a long wooden pole, with a ferrule forming the end finial on which the pole rests. The entire piece was intended as a ceremonial object, not as a practical weapon, which is evident from the bluntness of the blade. This bronze piece is unusual in its decorative motifs: the combination of a hybrid bird and a mythical beast can also be found on a bronze dagger-axe ge made for the use of Han Wang Shi Ye (Shou Meng, the King of Wu), who reigned from 586 – 561 BC and dated to the Spring and Autumn period. This comparable piece is in the Qing Court collection of the Palace Museum, Beijing (fig. 1).[1] Another bronze example decorated with a combat between a tiger and an eagle, dated to the late Spring and Autumn period, was excavated from Jinshengcun near Taiyuan in Shanxi province and is now in the collection of the Archaeology Institution of Shanxi Province.[2] A further comparable example with bird and beast decoration, dated to the Warring States period, is in the collection of the National Palace Museum, Taipei.[3]