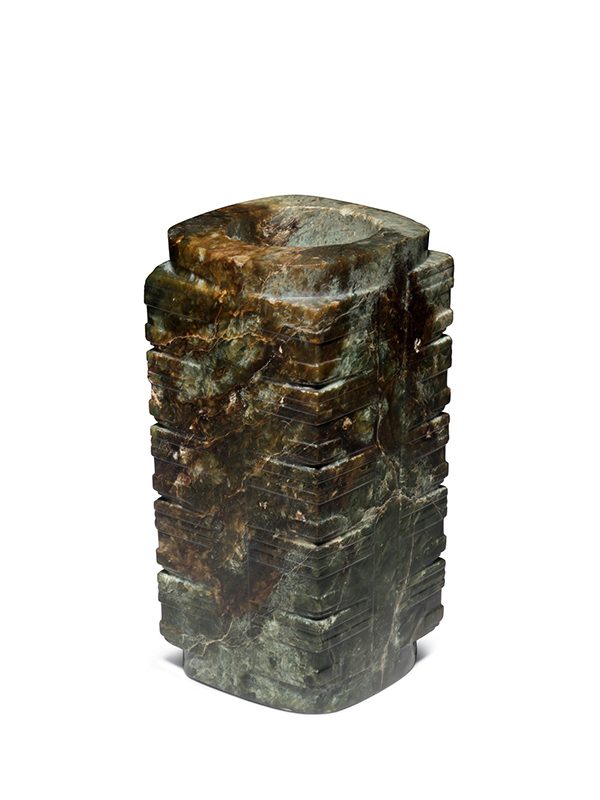 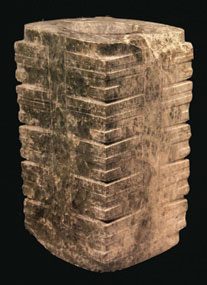 A large jade cong of conventional form, carved as a cylindrical tube within a square form, which is steadily diminishing from top to bottom. The narrow collars of the cylinder protrude from either end and the cong is clearly drilled from two directions. The sides are subdivided into five sections marked by horizontal divisions. Each of the five sections presents a face at each of the four corners: in this instance, ridges represent both the headbands and the nose clearly, while the concentric circles symbolise the eyes. The jade is of dark green colour, showing areas of grey and brown veining with some crystalline inclusions.

This impressive jade cong is one of the most exquisite examples of its kind. The cong is one of the principal jade types of the Neolithic period, first appearing during the Liangzhu culture around Lake Tai in Jiangsu province, an area that was home to one of the two major jade using peoples of early China. The Liangzhu people developed several of the most enduring jade forms, including the cong and the bi disc.[1] They inherited their skills and traditions from the Dawenkou and Hongshan people. As with the bi disc, the purpose of the cong tube is not entirely clear, although cong are thought to have had a ceremonial and possibly also a protective function. One interpretation is that the cong symbolises earth, while the bi disc symbolises heaven. There are a number of relatively large cong in Asia and the West. According to Rawson, these pieces may all have come from one or two large tombs discovered in the late 19th or early 20th century.[2] Two slightly smaller jade cong of closely comparable decoration and composed of five sections on either side are respectively in the collections of the Minneapolis Institute of Arts[3] and the Haining Museum (fig. 1).[4] Three examples of similar size and carved into six sections are respectively in the collections of the National Palace Museum, Taipei,[5] the Changshu Museum,[6] and the Liangzhu Culture Museum.[7]