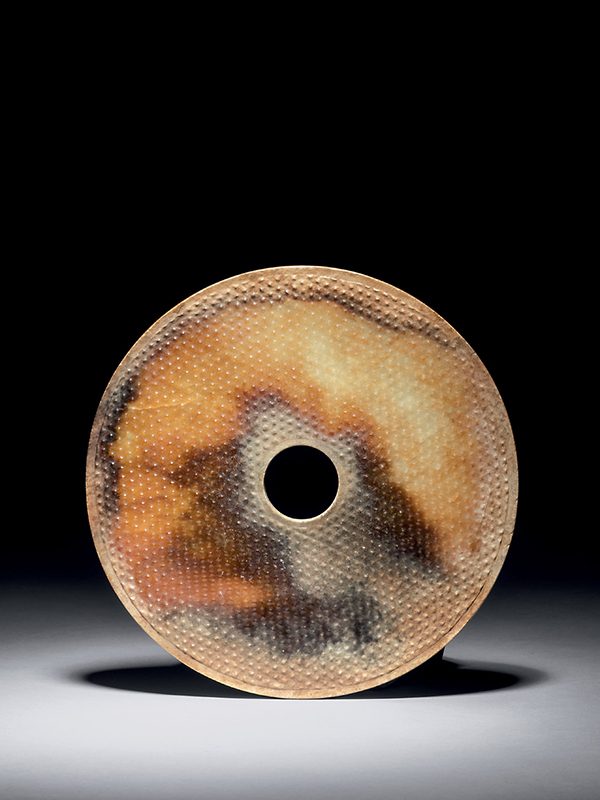 A jade bi disc of circular form with a round aperture cut in the centre. Around the inner and outer edges of the disc are two plain, raised bands. On both sides, the surface of the jade is worked with a symmetrical pattern of repeating raised dots, usually referred to as ‘rice-grain’ pattern. The original creamy-yellowish colour of the stone is partially visible. Large areas of the disc show a brownish and whitish colour, due to calcification.

The earliest forms of bi disc appear in burial sites along the east coast of China and date from the late Neolithic period.[1] The origin and purpose of the bi disc in early Chinese art is not entirely known. Eastern Zhou and Han ritual texts name the bi disc as a suitable offering to Heaven, hence it is said to be symbolic for Heaven. Bi discs were usually imparted as gifts and offerings, or used in rites and sacrifices, especially during the Spring and Autumn period (770 – 475 BC).[2] The so-called ‘rice-grain’ pattern or ‘rush-mat’ design seen on the present disc, which became the main decorative motif after the mid-Warring States period, was inspired by scroll and spiral patterns that appeared from the 6th century BC.[3]   Two slightly smaller bi discs of comparable design and size, dated to the Western Han dynasty, are in the collection of the National Palace Museum, Taipei.[4] Two further comparable examples, slightly larger in size and of similar proportion and design, dated to the Western Han dynasty, were excavated from Tomb no. 2 at Shenjushan, Jiangsu province and are now in the collection of the Nanjing Museum.[5]