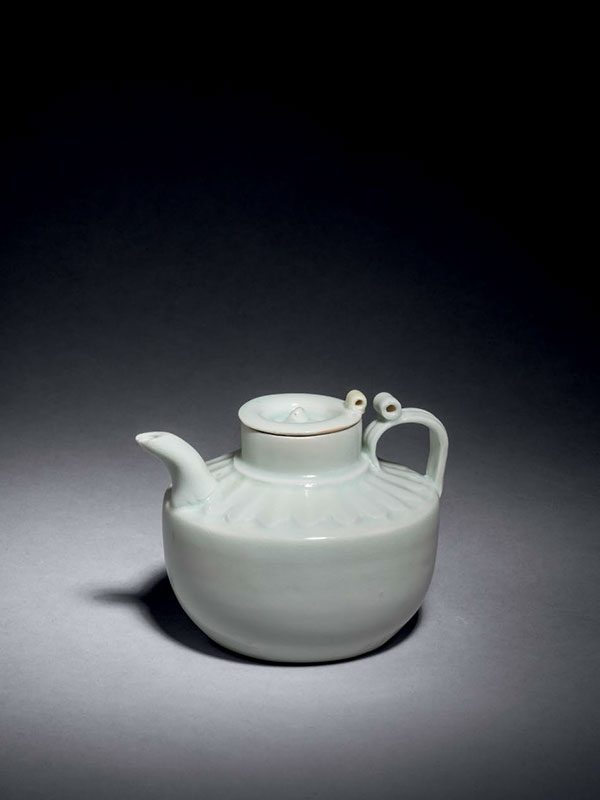 A qingbai porcelain ewer, the well rounded, thinly potted sides rising from a flat base and curving in sharply at the shoulder, which is decorated with a band of moulded, overlapping leaves. A double-strand loop handle has been applied to one side of the body with a short, curved spout opposite. The dish-shaped lid has a bud-shaped finial and a tiny loop to one side, which corresponds with a similar loop on the handle. The porcelain is covered with a transparent glaze of pale blue tone, which darkens in the crevasses of the body. The base is unglazed, showing the fine-grained white porcelain body, and has some characteristic burn marks.

The little loops on the lid and the handle serve to keep the lid and ewer together by allowing them to be connected with a tie, which is probably the reason that the lid still remains with the ewer. The short and rounded body and the tall shoulder loops are characteristic of earlier wares, [1] whilst the long curving spout and the tall handle are preferred throughout the Song and Yuan dynasties. The date of this piece can be established fairly accurately, as a very similar ewer was excavated recently from a tomb dated 1063 AD in Dexing county, Jiangxi province. [2] A larger qingbai ewer dated to the Song dynasty, 11th or 12th century, of a comparable form and with a flat lid, is in the Meiyintang collection. [3]

Another qingbai ewer comparable in size and decoration but with a sleeve cover, dated to the Southern Song dynasty, was excavated from a tomb at Diankoucun, Nanping city in Fujian province and is now in the Nanping Museum. [4] Two further examples of somewhat taller proportions and with a lobed body are respectively in the Meiyintang collection [5] and in the Avery Brundage collection at the Asian Art Museum of San Francisco. [6]