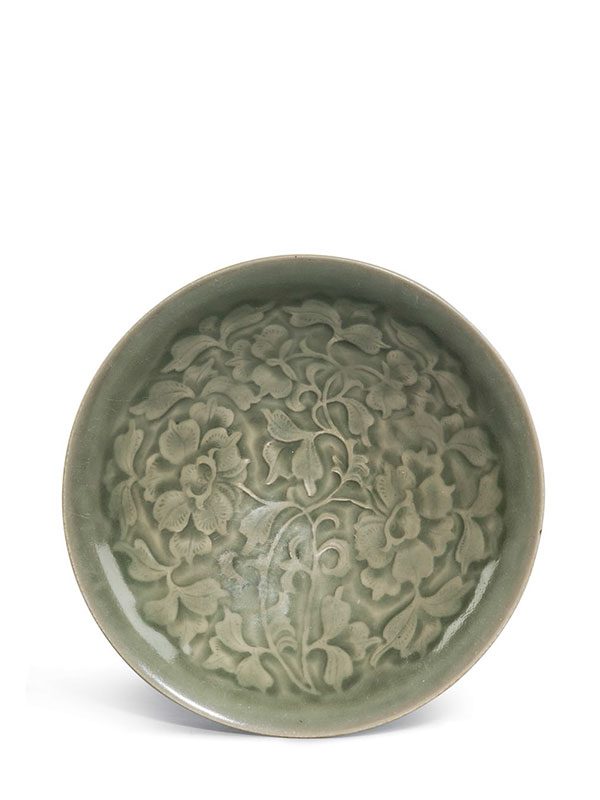 A large stoneware bowl of conical shape, the shallow, splayed sides supported on a low foot and terminating in an everted rim. The interior of the bowl is mould-impressed with a crisp decoration of a pair of peonies, their scrolling stems entwined with each other whilst the flowers spread in different directions amidst a leafy background. The stem that is turned towards the right has a vine extending towards the top with sickle-shaped leaves. The exterior of the bowl is plain, but the sides are so thinly potted that the impression of the mould used for the interior of the bowl is partly visible on the outside. The bowl is entirely covered in a lustrous, translucent olive-green glaze, which pools to a slightly darker tint in the recesses. The underside of the foot is partly unglazed, showing the fine grey stoneware.

As yaozhou wares became popular in the late 11th and early 12th centuries, potters began using moulds in the creation of both the shape and the decoration of their ceramics. [1] A smaller yaozhou bowl in the collection of the Art Institute of Chicago is illustrated by Mino, together with the type of biscuit-fired mould that was used in its production. [2] Two almost identical Northern Song yaozhou shallow bowls, produced at the yaozhou kiln in Shaanxi province, were unearthed in 1975 at Yanshan township, Shaowu city in Fujian province, and are now in the collection of the Fujian Museum. [3] They have sizes, dimensions and decorations that are identical to the present example and this indicates that these three bowls might have been impressed from the same mould. Two slightly larger yaozhou bowls moulded with a denser design of three paired peonies, also dated to the Northern Song dynasty, are respectively in the collection of the Idemitsu Museum of Arts, Tokyo [4] and the Meiyintang collection. [5]